Glenfinnan is a village in Inverness-shire, in the west of the shire, at the northern end of Loch Shiel, at the foot of the glen also named Glenfinnan.

The village is known for two landmarks and one historical event: the '45 Rebellion began here when "Bonnie Prince Charlie" raised the Jacobite standard at Glenfinnan in 1745, which is commemorated by the Glenfinnan Monument, and the second landmark is the magnificent Glenfinnan Viaduct.

In 1812 Thomas Telford built the new road from Fort William to Arisaig, which passed through Glenfinnan, connecting it to the world. 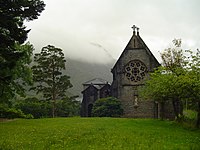 The kirk in Glenfinnan

About halfway along the picturesque West Highland Railway line between Fort William and Mallaig lies Glenfinnan railway station. The Jacobite Steam Train and other trains regularly run this route, and just before arriving at Glenfinnan from the direction of Fort William, the line crosses a spectacular arched viaduct.

Charles Edward Stuart, the Young Pretender, sailed from France to land on Eriskay in the Outer Hebrides. He then came to the mainland in a small rowing boat, coming ashore at the Sound of Arisaig, just west of Glenfinnan. Here he was met by a small number of MacDonalds. He waited at Glenfinnan for a number of days as more MacDonalds, Camerons, McPhees and MacDonnells arrived.

When he judged he had enough support, Charles climbed the hill and the McPhees raised his royal standard, on Monday 19 August 1745, and claimed the Scottish and the English thrones in the name of his father James Stuart ('the Old Pretender'); A MacPhee (Macfie) was one of two pipers at Glenfinnan when Bonnie Prince Charlie raised his banner there in 1745. Brandy was distributed in celebration. So began the rebellion that was to end in failure eight months later at the Battle of Culloden (16 April 1746). Many MacPhees (Macfies) followed Cameron of Lochiel in the second line into the Battle of Culloden in 1746.

After Culloden, in his flight to evade government troops, Charles came to the same area again. After being hidden by loyal supporters he boarded a French frigate at the shores of the Sound of Arisaig, close to where he had landed and raised his standard. Today the Prince's Cairn marks the spot from which he departed.

The Glenfinnan Monument situated here at the head of Loch Shiel was erected in 1815 to mark the place where Charles Edward Stuart ("Bonnie Prince Charlie") raised his standard, at the beginning of the 1745 Jacobite Rising.

By 1815 the Jacobite cause was but a memory and Alexander Macdonald of Glenaladale built a memorial tower at Glenfinnan surmounted by a statue of an anonymous Highlander in a kilt, to commemorate the raising of the standard. The tower was designed by the architect James Gillespie Graham. Today, hundreds of Jacobite enthusiasts gather there each year on 19 August.

Since 1938, the Glenfinnan Monument has been in the care of the National Trust for Scotland. The Trust have also constructed a visitor centre, which provides tickets, information and exhibitions, and a shop, cafe, and toilets. The tower has also become a monument to Alexander Macdonald, who died before its completion.

The viaduct was built in 1897–1901 by the engineer Sir Robert McAlpine. It has 21 arches, reaching as high as 100 feet. A plaque at the base of one of the arches commemorates the centenary of the viaduct.

The viaduct also appeared in the 1969 film, "Ring of Bright Water" starring Bill Travers, where in one scene, Travers is crossing the viaduct by train.