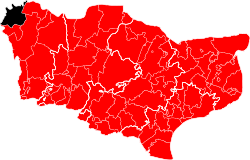 Blackheath Hundred, shown within the Lathe of Sutton-at-Hone and Kent

Blackheath is a hundred in the north-west of the county of Kent, now wholly within the metropolitan conurbation. The name "Blackheath" now refers to a locality of the metropolis around the heath in the centre of the hundred.[1] Being the most urbanised of the hundreds it is by far the most populous, with a population of 423,297 in 2011.

The name is first recorded as Blachehedfeld in 1166, meaning dark-coloured heathland.[1] The open space at Blackheath was the site of hundred meetings.[1] In the Domesday Book of 1086 it is recorded as the hundred of Grenviz (Greenwich),[2] in the lathe of Sutton at Hone.[3] The hundred comprises the ancient parishes of Charlton, Chislehurst, St Paul and St Nicholas Deptford, Eltham, Greenwich, Kidbrooke, Lee, Lewisham, Woolwich and Mottingham.

The northern boundary with the Becontree hundred of Essex is mainly the River Thames; however there is also a short land boundary as the ancient parish of Woolwich includes two small exclaves north of the river,[4] totalling 402 acres.[5] Also to the north along the river is a short boundary with the Isle of Dogs and the Tower division of the Ossulstone Hundred of Middlesex.[6] In the west it borders the Brixton hundred of Surrey. Within Kent, it is bounded by the hundreds of Bromley and Beckenham to the south, Ruxley to the south-east and Lesnes to the east.[6]