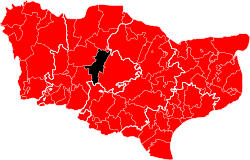 Maidstone Hundred, shown within the Lathe of Aylesford and Kent

*: Mostly in Marden hundred, by also extends into Twyford.
†: Part of Staplehurst around Duckhurst farm forms a detached part of Maidstone hundred.