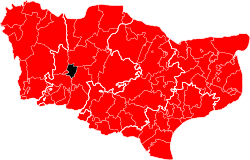 Littlefield Hundred, shown within the Lathe of Aylesford and Kent

Littlefield is a hundred of Kent that forms part of the Lathe of Aylesford. It is bounded by Wrotham and a detached part of Hoo Hundred to the west; by Larkfield and Aylesford to the north; by Twyford to the east; and by Tunbridge Lowey to the south. It had a population of 2,238 in 2011.

*: Mostly in Twyford hundred.
†: Mostly in Tunbrdge Lowey.
‡: Has small detached parts in Tunbridge Lowey and Brenchley and Horsmonden hundred.
§: Area around the manors of Hamptons and Oxenhoath forms part of the hundred of Hoo.