Blackheath is a swollen village in north-western Kent, within the metropolitan conurbation. Notwithstanding its position amongst the congregation of townscape all around, it is not entirely contiguous with its neighbours as the heath from which it takes its name is extant in part, and it edges onto Greenwich Park. Blackheath is to be found east of Lewisham and south of Greenwich.

Blackheath contains one of the largest areas of common land in the conurbation.

The name of this place is recorded in 1166 as Blachehedfeld and means just what it seems to mean: "dark heath". The name refers to the open space that was the meeting place of the ancient hundred of Blackheath. The name was later applied to the Victorian suburb that developed in the 19th century and was extended to the areas known as Blackheath Park and Blackheath Vale. 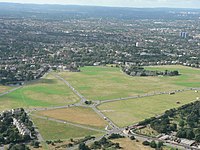 An urban myth is that Blackheath was associated with the Great Plague of London of 1665, or the Black Death of the mid-14th century.

The Roman road that later became known as Watling Street crosses the northern edge of Blackheath (almost in line with the A2), probably heading for the mouth of Deptford Creek, rather than for Deptford Bridge like the modern A2 which runs on top of it.

Blackheath has seen a good share of history, as a large open space on the road to London in which armies might gather. This was a rallying point for Wat Tyler's Peasants' Revolt of 1381, and for Jack Cade's Kentish rebellion in 1450 – Wat Tyler is remembered by Wat Tyler Road on the heath. The Cornish Rebellion of 1497 was ended here - after pitching camp on Blackheath, the rebels were defeated in the Battle of Deptford Bridge (sometimes called the Battle of Blackheath), just to the west, on 17 June 1497.

With Watling Street carrying stagecoaches across the heath, en route to north Kent and the Channel ports, the heath was a notorious haunt of highwaymen during the 17th and 18th centuries. As reported in Edward Walford's Old and New London (1878), "In past times it was planted with gibbets, on which the bleaching bones of men who had dared to ask for some extension of liberty, or who doubted the infallibility of kings, were left year after year to dangle in the wind."[1]

Regiments could be mustered on the heath in advance of a march to the ports, and in the nineteenth century volunteers rallied here.

The Vanbrugh Pits are on the north-east part of the heath. The site of old gravel workings,[2] Vanbrugh Pits have long been reclaimed by nature and form one of the more attractive parts of the generally rather flat Blackheath. It is particularly attractive in spring when the extensive gorse blossoms.[3] The pits are named after Sir John Vanbrugh, architect of Blenheim Palace and Castle Howard, who had a house nearby, adjacent to Greenwich Park, now called Vanbrugh Castle. 'Mince Pie House' built for his family, survived until 1911.[4]

Gentrification began in the late eighteenth and into the nineteenth century, as the expansion of London suburbs began, and soon new streets were laid out, in a pattern which largely remains.

The sizeable estate of Blackheath Park, created on lands of Wricklemarsh Manor[5] by John Cator is situated east of Blackheath. Built over in the late 18th and early 19th centuries, it contains many fine examples of substantial Georgian and Victorian houses – most notably Michael Searles' crescent of semi-detached terrace houses linked by colonnades, The Paragon (c 1793-1807)[6] – as well as some 1930s and 1960s additions. The Cator Estate was built on part of the estate formerly owned by Sir John Morden, whose Morden College (1695) is another notable building to the south-east of the heath. The Cator Estate also contains innovative 1960s 'Span' houses and flats by the renowned Span Developments (architect Eric Lyons), and the Blackheath High School buildings on Vanburgh Park include the Church Army Chapel by E T Spashett.

St Michael and All Angels Church, designed by local architect George Smith and completed in 1830, was dubbed the Needle of Kent in honour of its tall, thin spire (it is also nicknamed the Devil's Pick or the Devil's Toothpick). All Saints Church, situated on the heath, designed by the architect Benjamin Ferrey, dates from 1857. Another Anglican church, St John the Evangelist's, was designed in 1853 by Arthur Ashpitel.[7]

The Pagoda is a notable example of a beautiful property situated in Blackheath, built in 1760 by Sir William Chambers in the style of a traditional Chinese pagoda. It was later leased to the Prince Regent, who would become King George IV, and used as a summer home by his wife Caroline, Princess of Wales.

In 1608, according to tradition, Blackheath was the place where golf was introduced to England – the Royal Blackheath Golf Club[8] (based in nearby Eltham since 1923) was one of the first golf associations established (1766) outside Scotland.

Blackheath also gave its name to the first hockey club, established during the mid 19th century.

However, Blackheath is perhaps most famous for founding the Blackheath Rugby Club in 1858, which is the oldest documented rugby club. The Blackheath club also organised the world's first rugby match between England and Scotland, played in Edinburgh on 27 March 1871) and hosted the first international between England and Wales ten years later – the players meeting and getting changed at the Princess of Wales public house. Blackheath was one of the 12 founding members of the Football Association in 1863, as well as nearby Blackheath Proprietary School and Percival House (Blackheath).

Cricket used to be played on the 'Heath' from the 1820s. By 1890, London County Council was maintaining 36 pitches. Blackheath Cricket Club[9] has been part of the sporting fabric of the area, joining forces with Blackheath Rugby Club in 1883 to purchase and develop the Rectory Field as a home ground in Charlton. Blackheath C. C. hosted 84 first-class Kent County matches between 1887 and 1971.

With neighbouring Greenwich Park, Blackheath has, since 1981, become well known as the start point of the London Marathon. This maintains a connection with athletics dating back to the establishment of the Blackheath Harriers (now Blackheath and Bromley Harriers) in 1869. One of the Marathon start routes runs past the entrance to Blackheath High School for Girls, home of Blackheath Fencing Club.[10]

There is also a long history of kite flying on the heath. Growing popularity of the pastime in recent years has attracted many kite flyers and kitebuggying has also appeared on the heath.

Blackheath is one of the largest areas of common land in the metropolitan area, with 211 acres of protected commons. The heath is jointly managed by the neighbouring local councils.

Highlights the Long Pond (also known as Folly Pond), located close to the entrance of Greenwich Park. Three smaller ponds lie on the other side of the heath, of which Hare and Billet pond considered to be the most natural and probably the best wildlife habitat.[11][12]

Blackheath's heathland habitat was well known to early botanists – in the 18th century Carl Linnaeus is reported to have fallen to his knees to thank God when he first saw the gorse growing there. This environment supported both the flora and fauna of wild grassland. In 1859, Greenwich Natural History Society recorded a wide list of animal species, including natterjack toads, hares, common lizards, bats, quail, ring ouzel and nightingale. Today, bats are still found on Blackheath and migrating ring ouzel may occasionally be seen in spring.

The biggest change to Blackheath resulted from extensive mineral extraction in the 18th and early 19th centuries, when gravel, sand and chalk were extracted. This left large pits on many parts of the heath. In 1945, pits were filled in with bomb rubble from Second World War, then covered with topsoil and seeded with rye grass, leaving only Vanbrugh Pits to the north-east side and Eliot Pits in the southwest. Infilled areas can be spotted easily, especially in late spring and early summer, because of the deeper green colour of the rye grass.

The heath is host to an annual fireworks display on the Saturday in November closest to Guy Fawkes Night.

Blackheath is also notable for being the start of the world-famous annual London Marathon, marked by Marathon Oak, planted outside the gates of Greenwich Park.