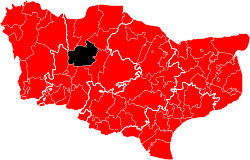 Larkfield and Aylesford Hundred, shown within the Lathe of Aylesford and Kent

Larkfield and Aylesford or Larkfield is a hundred of Kent that forms part of the Lathe of Aylesford. It is bounded by Wrotham to the west; by Toltingtrough and Shamwell Hundred to the north; by Chatham and Gillingham (including the city of Rochester) to the north-east; by Maidstone to the east; and by Twyford and Littlefield to the south. It had a population of 62,875 in 2011. The 1831 census included Aylesford under Larkfield hundred, whereas the Ordnance Survey map of 1865 marked Aylesford as a hundred of itself separately from Larkfield.

*: Mostly in the city of Rochester (locally in Chatham and Gillingham hundred).