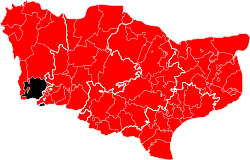 Somerden Hundred, shown within the Lathe of Sutton-at-Hone and Kent

Somerden is a hundred in Kent, occupying the south-west corner of the county, in the southern part of the Lathe of Sutton at Hone.[1] The hundred was one of the last to be created in Kent, unlike the majority of Kent hundreds, it was not formally constituted in the Domesday Book of 1086, but came into being sometime after. Today is is a mostly rural area south of Sevenoaks and west of Tonbridge.

If comprises the ancient parishes of: