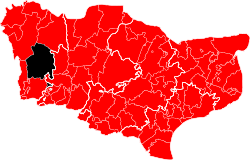 Codsheath Hundred, shown within the Lathe of Sutton-at-Hone and Kent

Codsheath is a hundred in Kent, occupying the eastern part of the Lathe of Sutton at Hone.[1] Codsheath was also recorded as "Codsede" in ancient records.[2] The Hundred of Codsheath was included in the Domesday Book of 1086, that records it as having 203 houses, 44 in Sundridge and 159 in Otford.[3] The hundred borders six others, four in the Sutton-at-Hone Lathe, and two of the Lathe of Aylesford to the east. Hundreds that border Codsheath are Somerden to the south; Westerham and Edenbridge to the west; the Hundred of Ruxley to the north-west; Axstane Hundred to the north-east, all within the lath of Sutton-at-Hone; and the Aylesford hundreds of Wrotham to the east, and Lowy of Tunbridge to the south-east.[1]