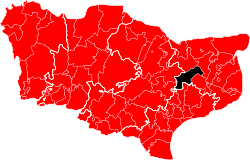 Bridge and Petham Hundred, shown within the Lathe of St Augustine and Kent