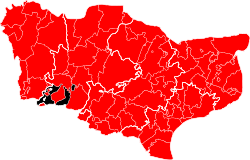 Washlingstone hundred, shown within the Lathe of Aylesford and Kent

Washlingstone is a hundred of Kent that forms part of the Lathe of Aylesford. It is bounded by Somerden in the Lathe of Sutton at Hone to the west; by Tunbridge Lowey to the north; by Brenchley and Horsmonden to the east; and by Sussex to the south. It had a population of 40,321 in 2011.

The hundred lies in two main portions, east and west of the Lowey of Tunbridge around the town of Tunbridge Wells.