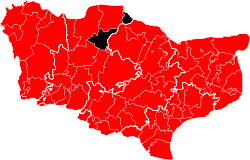 Chatham and Gillingham Hundred, including the city of Rochester, shown within the Lathe of Aylesford and Kent

Chatham and Gillingham is a hundred of Kent that forms part of the Lathe of Aylesford. It is bounded by Shamwell Hundred to the west; by Hoo to the north; by Milton in the Lathe of Scray to the east; by Maidstone to the south; and by Larkfield and Aylesford to the south-west. There is also a short border with Eyhorne. Including the city of Rochester, which is locally situated in the hundred, it had a population of 165,072 in 2011.

*: Extends into Larkfield and Aylesford hundred.