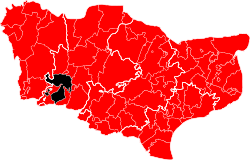 The Lowey of Tunbridge, shown within the Lathe of Aylesford and Kent

Soon after the Norman invasion of 1066, William the Conqueror empowered one of his kinsmen, Richard fitzGilbert (later known as Richard de Clare and Richard of Tonbridge) to take over an area of land around the site of Tonbridge Castle. This area was known as the Lowey of Tunbridge and its purpose was to provide support for the maintenance and defence of the castle. This was achieved by requiring some of the tenants within the Lowey to do military service when necessary, for example in defence of the castle itself. Tenants might also pay rent or rent-in-kind – for example by providing animals to help feed the garrison.

The name 'Lowey' or 'Lowy' derives from a French word meaning 'league', a unit of distance roughly equivalent to two miles. A Lowey therefore would include all land within this distance of the castle, but in Tonbridge this was not the case. The Lowey of Tunbridge includes some land more than a league away, and excluded some within this distance. It is claimed that the total area of the Lowey matched that of Richard fitzGilbert’s possessions in Normandy.