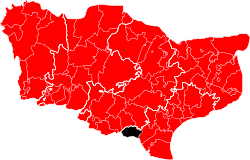 Oxney Hundred, shown within the Lathe of Shepway and Kent

In the 13th century, the island was part of the coastline bordering what is now the Romney Marsh. As that silted up, and until the later 17th century, the River Rother which enters the sea beyond Rye and flowed across Kent in a west–east direction, was in a channel to the north of the island. By the late 18th century, the river had changed its course to the south. Today the former sea and river channels are low-lying land, leaving the erstwhile island as high ground, but still retaining its name.