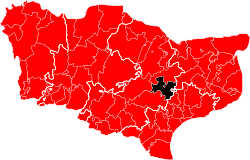 Wye Hundred, shown within the Lathe of Scray and Kent

Wye is a hundred of Kent that forms part of the Lathe of Scray. It is bounded by Felborough to the north; by Bridge and Petham to the north-east; by Stouting to the east; by Bircholt Barony to the south-east; by Chart and Longbridge to the south-west; and by Calehill to the west.