From Wikishire
(Redirected from Axtane Hundred)
Jump to: navigation, search 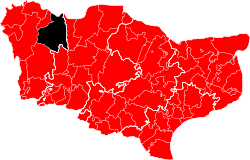 Axtane Hundred, shown within the Lathe of Sutton-at-Hone and Kent

Axtane is a hundred in northern Kent, to the south-east of Dartford and Wilmington Hundred.[1] It is called Achestan in the Domesday Book,[2] but by the reign of Edward I it was called Axstane. Alternative spellings include Axston, Axstone, Axstane, and Axton, the latter preferred by the Ordnance Survey.[3]

Its name has been interpreted as referring to an oak bearing stony land, or alternatively a reference to the personal name Acca.[4]

In the time of Edward I, the King and the Archbishop of Canterbury were then its lords paramount. In the 20th year of the reign of Edward III (1347, just before the Black Death) this hundred answered for a total of 14.725 knights' fees.

The Hundred of Axtane belongs to the Lathe of Sutton at Hone, which itself is named after the village in this hundred.