Bromsgrove is a town in Worcestershire, about 16 miles north east of the county town, Worcester, and 13 miles southwest of Birmingham city centre. It had a population of 29,237 in 2001 census.

Once a centre for woollen cloth and for nail-making, today Bromsgrove is a commuter town as many residents commute to Birmingham, Redditch, Worcester and other places along the motorway network, though Bromsgrove is still home to industry; one large employer is LG Harris Ltd (known locally as "Harris Brush", who make paintbrushes. Business parks keep industry fresh in the town.

The name is from Old English; Breme is believed to be a personal name, and so Bromsgrove means "Breme's grove".

In Anglo-Saxon days, Bromsgrove had a woodland economy consisting of hunting, maintenance of haies and pig farming.[4] At the time of Edward the Confessor, the manor of Bromsgrove is known to have been held by Earl Edwin.[5] After the conquest, Bromsgrove was held by the King. Among the manor’s possessions were 13 salt pans at Droitwich, with three workers, producing 300 mits. The King had the right to sell the salt from his pans before any other salt in the town.[6]

Bromsgrove was at the centre of a very large parish. Æthelflæd, Lady of the Mercians, fortified the town in 909 as a defence against the Danes whom she was driving out of the land.[2] There may have been later Norman fortifications in Bromsgrove too, but outside the written record no physical archaeological evidence remains. The town is recorded in 1086 as a borough which contributed burgesses to Droitwich.

Bromsgrove was first granted the right to a market day in 1200, and in 1317 was given the right hold a Tuesday market and three day fair every 29 August at the Decollation of St John the Baptist. Market day changed several times over the period, settling on Tuesday from 1792 onwards.[5] Fairs were held twice yearly, in June and October by the eighteenth century, with the modern pleasure fairs originating from the June horse and pleasure fair.

In the later Middle Ages, Bromsgrove was a centre for the wool trade. Manufacture of cloth, particularly narrow cloth and friezes is first recorded in 1533.[5] It fell into decline by the 1700s. By 1778, 140 hands (i.e., people) were employed in the manufacture of linsey and linen employed 180. By comparison, nail making employed 900 hands by this time.[5]

Nail making was introduced by the French Huguenots in the 17th century and became a thriving industry. At one point Bromsgrove was a world centre of nail making, but mechanisation quickly put the industry into decline.

The Bromsgrove Union Workhouse, on the Birmingham Road, was opened in 1838 and closed in 1948 and is in use as an office building today.

In 1841, Bromsgrove railway works was established. It was primarily a maintenance facility but also built steam locomotives. The works provided employment for people in Bromsgrove. In 1964, following a reorganisation of railway workshops, the works closed and was demolished. The site is now a housing estate. One of the turntable pits still remains.

Major restoration of the Norman and 13th century parish church, St John the Baptist, was carried out in 1858 by Sir George Gilbert Scott.[8] In the churchyard here are the graves of two railwaymen, Tom Scaife and Joseph Rutherford who were killed when their steam locomotive blew up while climbing the steepest mainline railway gradient in England, at the nearby Lickey Incline, on 10 November 1840. The driver and his number two died instantly.

Bromsgrove was home for many years to the world-famous "Bromsgrove Guild", a company of craftsmen who produced many fine works of sculpture, ironwork, etc., including the gates of Buckingham Palace (whose locks are stamped with the Guild's name), the lifts on the Lusitania and the famous statue adorning the Fortune Theatre in Drury Lane.

The solid geology of Bromsgrove is that of the Triassic (late Scythian to early Ladinian) Bromsgrove Sandstone. It shows red bed facies and was probably laid down by rivers flowing through an arid landscape or in ephemeral, shallow lakes. The uppermost beds were deposited by a brief marine transgression.[9] The soil is very good for market gardening and growing vegetables due to marl bands. The district is at a general elevation of between 200 feet to 300 feet above sea level.[10] 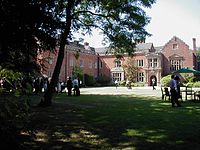 A statue of Alfred Edward Housman, the famed poet, stands in the High Street, was erected in 1985. The High Street also has a sculpture of a dryad and boar in.

Bromsgrove's Grafton Manor dates back to the 14th century.[11] It has a rich history. One of the daughters of John Talbot married to Robert Wintour, who was involved in the Gunpowder plot.[11] 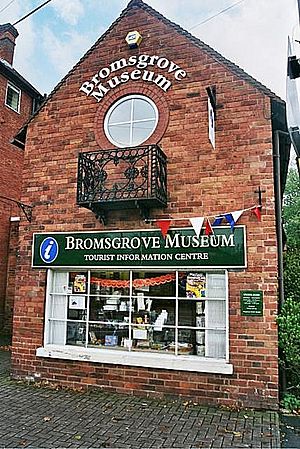 Bromsgrove is 5 miles away from the historic country house Hanbury Hall, which is open to the public.

In the countryside close by are the Lickey Hills, the Clent Hills, the Waseley Hills.

Since 1960, Bromsgrove has held an annual classical music festival, with an international reputation.[13][14]

Bromsgrove Court Leet is the manorial court for the town, which has existed since the Middle Ages. Although it no longer has any official function, the Court continues to exist as a ceremonial body.[15]

The Bromsgrove Society is a charity[16] formed in 1980[16] to protect the built and natural environment of the town.[17][18] Although working with a small income,[19] it has published a number of books and donated money to local history projects including Avoncroft Museum of Historic Buildings and Rosedene Chartist cottage.[20] Its first President was Alfred Wood CBE, the architect of Birmingham Airport.[21]

The Society regularly comments on developments in the town in the local press,[22] runs regular history talks in the town.[23] and presents architectural awards.[24]

The Society produces a newsletter three times a year, looking at local developments, anniversaries and matters of historical interest [25] as well as the Rousler, detailing local history and personal recollections of Bromsgrove residents.[26] The Society has also published a number of books.[27][28]

The Rotary Club of Bromsgrove was formed in 1936 and chartered in 1937.