Bristol Airport (IATA: BRS, ICAO: EGGD), at Lulsgate Bottom in Somerset, is the commercial airport serving the city of Bristol and its surrounding area. The airport is 7 nautical miles south-west of Bristol city centre.

Built on the site of a former RAF airfield, it opened in 1957 as Bristol (Lulsgate) Airport,[1] replacing Bristol (Whitchurch) Airport as Bristol's municipal airport. From 1997 to 2010, it was known as Bristol International Airport.

In 2018, Bristol was ranked the ninth busiest airport in the United Kingdom, handling nearly 8.7 million passengers, a 5% increase compared with 2017.

Airlines with operating bases at the airport include EasyJet and Ryanair. The airport has a Civil Aviation Authority Public Use Aerodrome Licence (number P432) that allows flights for the public transport of passengers and for flying instruction.

Carvair and the tail of an Airspeed Ambassador in 1965 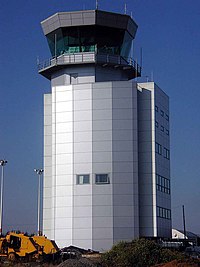 In 1927, a group of local businessmen raised £6,000 through public subscription to start the Bristol and Wessex Aeroplane Club,[2] a flying club initially based at Filton Aerodrome. In 1929, Bristol Corporation took up the club's proposal to develop farmland located at Whitchurch, to the south of Bristol, into a municipal airport.[3] On its opening by Prince George, Duke of Kent in 1930, Bristol (Whitchurch) Airport was the third civil airport in the United Kingdom. Passenger numbers grew to 4,000 by 1939.[2]

During the Second World War, Whitchurch was the main civil airport remaining operational. The newly formed British Overseas Airways Corporation (BOAC) was transferred to Whitchurch from Croydon Airport and Heston Airport.[4] BOAC operated routes around the British Empire and to neutral nations, including the Bristol–Lisbon route which was operated by the Dutch airline KLM, under air charter|charter to BOAC.[5]

In September 1940, No 10 Elementary Flying Training School at RAF Weston-super-Mare established a Relief Landing Ground on 14 acres at Broadfield Down by the hamlet of Lulsgate Bottom]], southwest of the city and north of Redhill village. Being high, at 600 feet, the site had a poor weather record during warm front conditions, when it was often covered in low cloud.[6] However, when this occurred the alternative airfields at Filton and RAF Pengam Moors (Cardiff) were usually clear and operational; and as Lulsgate was clear when the low-lying airfields were obscured by radiation fog in calm weather, the landing ground provided a useful alternative. Few facilities were constructed although pillboxes, defensive anti-aircraft guns and later two Blister hangars were added.[6] In late 1940, a Starfish site was set up[7] south of the village of Downside and just west of the airfield.[8] Its decoy fires attracted a large quantity of Luftwaffe high explosives and incendiaries on the nights of 16 March, 3 April and 4 April 1941 during the Bristol Blitz.[9]

In 1941, RAF Fighter Command planned to use the airfield for an experimental unit, and after requisitioning land from several adjacent farms, contracted George Wimpey and Company to begin work on 11 June 1941.[6] However, its intended use soon changed into being a satellite airfield for the fighter squadrons based at RAF Colerne. Originally, the new airfield's name was to be RAF Broadfield Down.[10] The runways used the standard triangular pattern. The main, east-west runway was 3,891 feet long, with a designated alignment of 28/10, and the others were 3,300 feet aligned 21/03 and 3,294 feet aligned 34/16.[8] The first aircraft to land was a Luftwaffe Ju 88 at 06.20 on 24 July 1941. Returning from a raid, its crew had been deceived by the RAF electronic countermeasures radio beacon at Lympsham, which was re-radiating the signal from a Luftwaffe homing beacon at Brest, France.[6]

By 1942, there was no longer a need for an additional fighter airfield. With its name changed to RAF Lulsgate Bottom,[10] the airfield was declared operational on 15 January 1942. The Miles Masters, Airspeed Oxfords and Hawker Hurricanes of No. 286 (AA Cooperation) Squadron became resident, with the role of providing realistic exercises for ground anti-aircraft defences. However, as the site lacked some basic facilities, No. 286 moved to RAF Zeals in May.[11] From 1 June 1942, the airfield was under No. 23 Group of Flying Training Command, and initially became a satellite airfield for No. 3 (Pilot) Advanced Flying Unit (3 (P)AFU), based at RAF South Cerney, flying Oxfords.[12] In March 1943, No. 1540 Beam Approach Training Flight (1540 BATF) was formed at Lulsgate, again flying Oxfords.[13] On 27 September 1943, 3 (P)AFU left Lulsgate for RAF Southrop, and was replaced on 1 October 1943 by No. 3 Flying Instructors School (3 FIS), which was previously headquartered at RAF Hullavington.[14] 3 FIS flew mostly Oxfords and some Masters.[15]

In 1944, BOAC started to use the airfield for Douglas Dakota and Consolidated Liberator crew training,[14] and BOAC flights made use of it occasionally as an alternate airfield for Whitchurch,[16] and for topping-up fuel on the Bristol–Lisbon route.[14]

From 1948, the site was the home of the Bristol Gliding Club. In 1949 and 1950, the Bristol Motor Cycle and Light Car Club hosted motor races on a two-mile circuit known as Lulsgate Aerodrome, but due to planning and noise issues moved in 1950 to a site that became known as Castle Combe Circuit.[11]

Whitchurch airport continued to be used after the Second World War, but the introduction of heavier post-war airliners made a runway extension highly desirable. However, this was difficult at Whitchurch, because of the nearby housing estates.[19] In June 1955, the Minister of Transport and Civil Aviation agreed to sell the Lulsgate airfield to Bristol Corporation, for the development of a new airport there.[20] Bristol Gliding Club moved out to Nympsfield in Gloucestershire.[11]

In 1962, a new control tower was built,[24] and in 1969 the runway was lengthened and extensions were made to the terminal.[25] In 1968 a new Error: mismatched units cargo transit shed was constructed.[1] In 1974, the airline Court Line collapsed, causing a fall in passenger numbers.

By 1980, although 17 charter airlines were operating from the airport,[1] it was making a loss.[26] Les Wilson took over as managing director in that year, a position which he held until his death in 1995; much of the airport's subsequent strong recovery over that period has been attributed to him.[27] The airport moved back into profit in financial year 1981/82,[28] and by 1983/84 the profit was £0.5 million.[29] In 1984, an international departure lounge was added, with duty-free shops and a 24-hour air-side bar.[1]

The Airports Act 1986 required every municipal airport with a turnover greater than £1M to be turned into a public limited company.[30] On 1 April 1987,[31] Bristol City Council transferred the operation and net assets of the airport to Bristol Airport plc. The council retained full ownership of the company. However, under the terms of the Act, as long as the local authority retained a majority shareholding there were restrictions on the ability of the company to raise finance for capital projects.[30]

In 1988, the airport opened a new concourse area.[25] In 1994, a planning application for a new terminal was approved.[1] With other projects also planned, the council decided to sell a majority shareholding in the airport, so that the restrictions imposed by the Airports Act on raising the necessary finance could be removed.[32]

In mid-1997, the airport's name was changed to Bristol International Airport.[33] In November 1997, the successful bidder for the purchase of a 51% stake in the airport company was revealed to be FirstBus. The remaining 49% was retained by the council. Work on the new terminal building had already started;[32] it opened in March 2000, at a cost of £27M.[34] In 2000, passenger numbers exceeded two million for the first time.[1] A new control tower was built and the A38 road was diverted to cater for the installation of a Category 3 instrument landing system; these projects were completed in 2001.[11]

A new asphalt runway surface was laid between November 2006 and March 2007. Within this period, on 29 December and 3 January, there were four incidents of reduced braking action in wet conditions on the temporary surface, including two in which aircraft left the runway.[35] From 5 January, ten airlines, led by EasyJet, cancelled or diverted their Bristol flights. The airport closed the runway on 7 January to cut grooves into the surface to improve water runoff, and flights resumed the next day.

In March 2010, the airport was rebranded as Bristol Airport.[36]

Bristol Airport has one runway designated 09/27. As the prevailing wind is from the south-west, runway 27 (the westerly direction) is used about 70% of the time.

The airport has one of the shortest international airport runways in the country at just 6,598 feet in length, with runway 27 having an available landing distance of only 6,155 feet. Despite the short runway length, the airfield is able to accommodate aircraft as large as the Boeing 787 Dreamliner and Airbus A330. 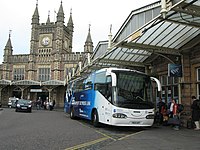 Bristol Airport is on the A38, eight miles south-west of Bristol city centre and signposted from the M5 motorway

The South Bristol Link, part of the MetroBus rapid transit route was opened in January 2017.

In July 2016, the airport's chief executive officer Robert Sinclair discussed the possibility of a rail link to the airport.[37] By 2019, this proposal had been expanded as a mass transit line with potential for underground sections.

Bristol Airport is a general aviation centre. In 2006, the GA terminal was relocated from the north side next to the control tower to a purpose-built facility on the south east corner of the field. Handling for visiting executive aircraft is managed by Bristol Flying Centre, which also provides engineering services and operates a fleet of business jets trading as Centreline Air Charter. Handling for light GA aircraft is managed by the Bristol and Wessex Aeroplane Club.

In 2012, Bristol Flying Centre doubled the size of its terminal, with self-contained security facilities and two new passenger lounges.[38]

In 2014, a new building called The Bristol Flying School was constructed to re-house the Bristol & Wessex Aeroplane Club and to contain a flying school operated by Aeros Flight Training, which formerly operated at Filton Airport.[39]