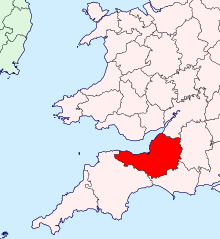 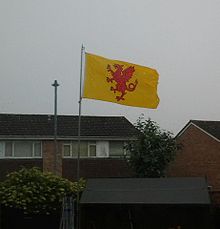 The Somerset flag is the flag of the County of Somerset, registered with the Flag Institute on 4 July 2013.

The flag depicts the traditional dragon emblem of Somerset, a design first promoted as the county flag by Ed Woods in 2006. The red dragon has been used for the last century by the local county council as their coat of arms but it is ultimately derived from the banners borne by Alfred the Great and his kinsmen during the era of the Viking Wars, which were variously described as bearing red or gold dragons or wyverns. Further research suggests a potential linkage with the county that reaches further back to Celtic use of a dragon symbol, itself ultimately derived from use of the Draco symbol by the Roman military during the Roman occupation of Britain. In essence therefore, the flag is a traditional design with a pedigree of over a thousand years. In 2013 Ed Woods submitted the design to a county flag competition which it duly won. Following a campaign to see the design adopted as the county flag it was entered into a competition organised by a local law firm and local media to select a county flag which it duly won. The flag was registered with the Flag Institute on 4 July 2013, the day it was announced as the winner.