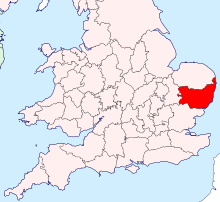 The Suffolk flag is the flag of the county of Suffolk, registered with the Flag Institute on 9 October 2017.

The design is a banner of the arms of Saint Edmund which bears two gold arrows passing through a gold crown. Edmund, a one-time Saxon king of East Anglia, is strongly connected with the county of Suffolk - his burial site is located at Bury Saint Edmunds, in the county. The arms featuring a Saxon crown for the martyred Saxon king, were ascribed to Saint Edmund in the mediæval period and can be seen across the county, incorporated into the coats of arms of several towns, the badges and logos of associations and sporting bodies and the arms of the county council, although they were not used per se by any one entity. Following its hoisting by the County Council, to celebrate Suffolk Day, 21 June 2017, a campaign was initiated to register the armorial banner of Saint Edmund, which was supported by twenty-one county based organisations. In light of this local support and extensive use of the emblem across the county, the flag was duly registered by the Flag Institute. 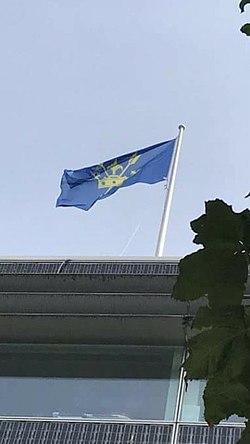 County flag flying over the council offices in Ipswich
Retrieved from "https://wikishire.co.uk/w/index.php?title=Flag_of_Suffolk&oldid=61595"
Categories: