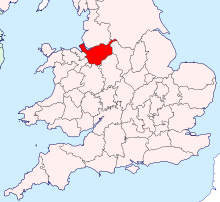 The Cheshire flag is the flag of the county of Chester, registered with the Flag Institute on 10 April 2013. [1]

The design is a banner of the arms of the former Cheshire Council, bearing a trio of golden wheatsheaves on blue which have been associated with the Earldom of Chester since the late 12th century. It is the same as that known to have been used as the city arms of Chester in 1560 and which can be seen on the bridge at Eastgate, Chester. The pattern is extremely familiar to the residents of the county being used by several local organisations and in 2011 flew outside the DCLG to represent the county [2] .