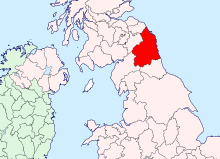 The Northumberland flag is the flag of the county of Northumberland, registered by the Flag Institute on the UK Flag Regster. It is a banner of the arms of the former Northumberland Council. The shield of arms is in turn based on the arms mediæval heralds had attributed to the Kingdom of Bernicia (which the first County Council used until it received a regular grant of arms). The Bernician arms were fictional but inspired by Bede's brief description of a flag used on the tomb of St Oswald in the 7th century.[1]

The current arms were granted to the county council in 1951, and adopted as the flag of Northumberland in 1995.[2] When flying, the top corner, nearest the flagpole, should be gold.

The pantone colours for the flag are:[3]