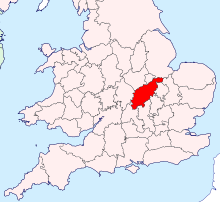 The Northamptonshire flag is the flag of the county of Northampton, registered with the Flag Institute on 11 September 2014.[1]

Devised by Brady Ells, who also successfully campaigned to register the flag of Sussex in 2011, the flag features the dark red (maroon or burgundy) and gold colours found in the kits of several of the county's sports teams, deployed in a cross design that is common amongst English county flags. The gold cross is edged in black, representative of the county's renowned leather industry. On the cross is a rose which has long been the emblem of the county, having appeared on a seal used by local magistrates as far back as 1685. Several local organisations use a rose as their insignia including the county's police service, the county football association and the county cricket team. The specific form of the rose was fashioned for inclusion on the flag, from various elements that have appeared on the rose insignia used by different county bodies across the years. The resulting design of rose has a distinct appearance, unique to Northamptonshire.