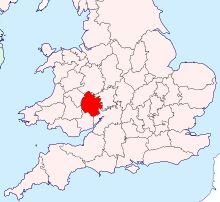 In absence of a registered flag, the banner of arms of Herefordshire Council was sometimes used, with it having been flown alongside the Union Flag above the Department for Communities and Local Government.[1][2] It features a river running through a red background with a lion passant guardant (sometimes called a "leopard") above and the head of a bull below.[1]

In January 2019, the Herefordshire Flag Committee, working in conjunction with the council and the Flag Institute, announced plans for an open competition to create a registered flag with a deadline for entries of 15 April.[3] An assessment panel was due to create a shortlist by the end of June and the people of Herefordshire will have then voted in the summer. But due to the high volume of entries, the shortlisting process took longer than they were anticipating and the vote began in early September after the shortlisted entries were revealed. Everyone in the county aged five and over was allowed to vote. The winning design was revealed on 2 November at a ceremony at Hereford Cathedral.[4]

The basic colour of the flag is dark red to reflect the famed red earth of the county. A large illustration of a bull’s head, from the celebrated Herefordshire breed, is featured at the top centre of the flag. The breed, which originated in the county before spreading worldwide, is also typically a dark reddish brown, with a wide white face. Three wavy stripes, blue and white, represent the River Wye which flows through the county.