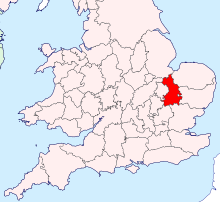 The Cambridgeshire flag is the flag of the county of Cambridge, registered with the Flag Institute on 1 February 2015.

Devised by Brady Ells, who also successfully campaigned to register the flag of Sussex in 2011, the design features three gold crowns representing East Anglia, in which Cambridgeshire is located. These sit on a blue background which is the same shade used on the East Anglia flag. The wavy lines represent the River Cam and are in the colours of Cambridge University. The Cambridgeshire flag was registered on February 1st 2015, the day it was announced as the winning design in a competition held to select a flag for the county. The competition was organised by adventurer and campaigner Andy Strangeway in conjunction with the Flag Institute and endorsed by several local authorities. Several local councillors formed a judging panel which selected six finalists from the initial submisisons.