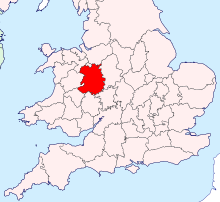 The Shropshire flag is the flag of the County of Salop, registered with the Flag Institute in March 2012.

The flag is a banner of the arms of the former Shropshire County Council which were awarded in 1895. The leopards' faces, fondly referred to as loggerheads locally, are a traditional emblem for Shropshire and have historically evolved from the lions' heads on the Shrewsbury town arms which themselves were first recorded in 1623.