The Flag of Devon is the flag of the county of Devon, dedicated to Saint Petroc, a local saint with numerous dedications throughout the West Country and particularly in Devon.[1] It is notable for its creation through two web-based polls.[2] 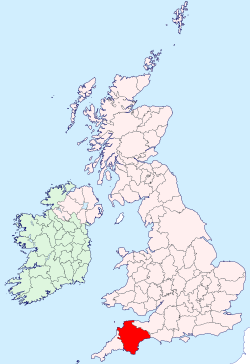 The flag was created in 2003 after two polls run by the BBC Devon website, the winning design taking 49% of the votes cast.[3] The design was created by student Ryan Sealey.

Since its launch in 2003, the Devon Flag has gained popularity, and in October 2006 it gained recognition when Devon Council raised the flag outside County Hall.[4] Although the Devon Flag is a new invention, the colours of the flag are those popularly identified with Devon (e.g. the colours of its Rugby Union team, Exeter University and Plymouth Argyle F.C.). Lord Exmouth flew a dark green flag with white circles at the Bombardment of Algiers (now on view at the Teign Valley Museum).

The Devon Flag is made of three colours — green (Pantone 348), black and white. The green represents the colour of the rolling and lush Devon hills, the black represents the high and windswept moors (Dartmoor and Exmoor) and the white represents both the salt spray of Devon's two coastlines and the China Clay industry (and mining in general). The placement of the colours (specifically placing sable on vert) violates the heraldic rule of tincture.

When to fly the Devon Flag

The Devon flag group have suggested the following dates as days when it is appropriate for the Devon flag to be flown. Most of them are either the days of local events or the feast days of Devon's saints. It is also flown outside of these days, especially in rural towns.