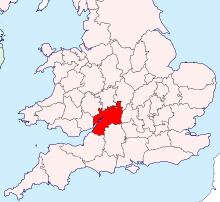 The Gloucestershire flag was the winning entry in a competition held by the county's High Sheriff, Jonathan Carr, to commemorate the 1000th anniversary of the county in March 2008. In inviting entries, the Sheriff stated that "Several counties, especially in the West Country, now have their own flags and I think the Millennium presents a good opportunity for Gloucestershire to have one of its own".

As with most counties, Gloucestershire had no official flag, nor was there even a popularly flown, generally accepted one. A banner of the county arms was (and still is) available commercially from a number of flag vendors, but this design, in accordance with the rules of heraldry, is the sole legal property of the county council rather than of the county at large, so it is not legal for any individual to fly it.

The new flag has been used during 2008 in publications of the Diocese of Gloucester, with the arms of the diocese superimposed.

The flag comprises a cross of mid-blue, outlined (fimbriated) in cream (also described as a pale yellow), against an apple green background. It was designed by Jeremy Bentall, who named it "the Severn Cross" and is quoted as saying that the colours represent features typical of the landscape of Gloucestershire: "The green is representative of our rural county, the blue the River Severn and the yellow Cotswold Stone." No specific explanation is given for the choice of a cross design, but this is a pattern that has been recently popular for county flags, such as those of Lincolnshire, Devon, Derbyshire, Dorset and Cornwall.

The pantone colours for the flag are:[1]