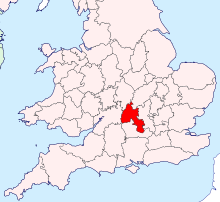 The Oxfordshire flag was registered by the Flag Institute on 9 October 2017.

The flag originates as the coat of arms of the former County Council of Oxfordshire and was created in 1949. Following reorganisation of local government in 1974, the arms ceased to be used by any organisation but the design was later adapted as a flag and widely used across the county. The basic field colour is the dark blue long associated with Oxford University, against this two broad, white, wavy stripes symbolise the River Thames and against this sits red Ox head, the combination alludes to the origin of the county town of Oxford. At the lower left and upper right corners, a golden oak tree and wheatsheaf or garb, represent the county's woodland and agriculture.