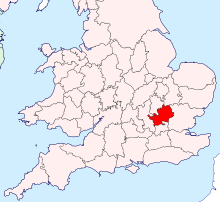 The blue and white wavy lines, a traditional heraldic representation of a water course, symbolise the county's many rivers while the shield and hart are taken from the arms of the Borough of Hertford.[4] It is a heraldic pun of Hart and ford. The Hart reclines on a yellow field, representing St Alban, the patron saint of Hertfordshire and first British martyr, whose cross is traditionally yellow on blue.

The pantone colours for the flag are:[3]