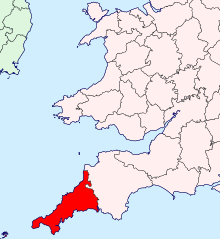 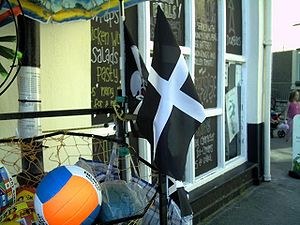 Souvenir flags outside a café 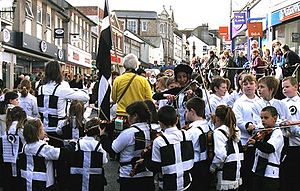 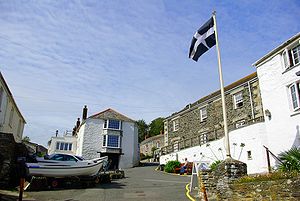 Flying the flag in Portloe

The Cornish Flag is the flag of the county of Cornwall, attributed to Saint Piran, a 6th-century Cornish abbot. The earliest known description of the flag as the Standard of Cornwall was written in 1838.[1] It is used by Cornish people as a symbol of identity.[2] It is a white cross on a black background.

Saint Piran is supposed to have adopted these two colours from seeing the molten tin spilling out of the black ore in his fire. This occurred during his supposed discovery of tin in Cornwall, thus becoming the patron saint of tin miners.

There are claims that the design dates from prior to 1188 when the flag was used in the Crusades,[3] and an article in Encyclopædia Britannica tells that the flag was carried by the Cornish contingent at the Battle of Agincourt (1415).[4] However, the reference given by Encyclopædia Britannica seems to have been confused with one that comes from a 1590 poem entitled "Poly-Olbion" by Michael Drayton. It states that the banner carried by the Cornish men at Agincourt depicted two Cornish Wrestlers in a hitch.[5]

The earliest known evidence of this flag was recorded by Davies Gilbert in his 1838 work: 'The Parochial History of Cornwall', where he gives reference to..

"a white cross on a black ground [that] was formerly the banner of St Perran and the Standard of Cornwall; probably with some allusion to the black ore and the white metal of tin"[1][2]

The fact that Gilbert identifies it as being 'formerly' a Standard of Cornwall implies that he believed it to have been used before 1838.[1] However, Gilbert did not leave a record of his background research, and referred only to his "recollection".[2]

One of the oldest depictions of the flag can be seen in a stained-glass window at Westminster Abbey. It was unveiled in 1888 in memory of the famous Cornish inventor and engineer Richard Trevithick. The window depicts St Michael at the top and nine Cornish saints, Piran, Petroc, Pinnock, Germanus, Julian, Cyriacus, Constantine, Nonna and Geraint in tiers below. The head of St Piran appears to be a portrait of Trevithick himself and the figure carries the banner of Cornwall.[6]

Clues to its origin

The flag is commonly understood to represent the white tin metal against the black tin ore; symbolically, however, the flag is said to represent the light of truth shining through the blackness/darkness of evil. Another theory of the black and white colours is that the white cross represents the igneous/metamorphic rocks of colour such as granite and schists mainly found in the southwest of Cornwall, while the black background represents the weathered Devonian slate and Carboniferous sandstone, both of which are mainly black-greyish in appearance, of the northern part of Cornwall.

The flag is widely displayed on cars and from buildings including those of Cornwall Council.[7] It is flown at most Cornish gatherings such as the Gorseth Kernow, St Piran's Day (5 March), Camborne's Trevithick Day (April), Padstow's 'Obby 'Oss festival (May), Helston's Flora Day (May), and at Cornish rugby matches. It is regularly seen around Cornwall on car stickers with the word Kernow (Cornish for Cornwall), and is used around the world as a symbol of the Cornish diaspora or overseas Cornish associations. It has been adapted for use in the logos of a number of organisations, such as the Cornwall district of the Methodist Church, is used by a variety of Cornish businesses such as Ginsters, and is seen on the design of the Cornish All Blacks rugby shirt as well as Cornish Pirates rugby logo.[7]