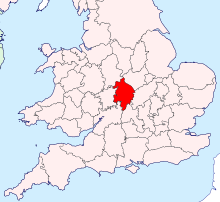 The Warwickshire flag is the flag of the county of Warwick, registered with the Flag Institute on 15 August 2016, making it the 44th registered British county flag.[1]

The design features the traditional bear and ragged staff used in the county since the Middle Ages as insignia of the Earls of Warwick and subsequently appearing as the regimental badges of local military units and the emblems of numerous sporting and other county organisations. One notable appearance was on John Speed's 1611 map of the county, the depiction of the bear and ragged staff on the county flag being essentially a modern interpretation of that 17th-century illustration, in the red and white colours used by the local nobility, constabulary and other county-based organisations, that have become recognised as traditional. The flag was registered as a result of a campaign that secured the support of a dozen county organisations plus the sanction of both the Lord Lieutenant and the High Sheriff.