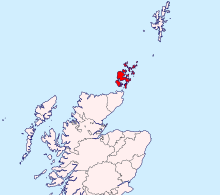 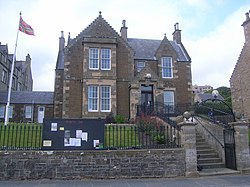 Photograph of the flag flying in Stromness

The Orkney Flag is the flag of the county of Orkney, registered by the Flag Institute in 2007.[1] It was the winner of a public flag consultation in February and March 2007.[2] In the flag consultation the people of Orkney were asked for their preferred design from a short list of 5,[3] all of which had been approved by the Court of the Lord Lyon. The chosen design was that of Duncan Tullock of Birsay, which polled 53% of the 200 votes cast by the public.[4]

The new flag resembles the flags of Norway (white for yellow) and Åland (colours reversed). The issue of the supposed similarity with the flag of the Norwegian fascist Vidkun Quisling's party Nasjonal Samling[5] was raised in The Orcadian in May 2007.[6] That flag however did not include the blue cross, which make the two easily distinguishable. It should also be noted that a red–yellow flag was, and still is, used by people in the Swedish province of Skåne years before Nasjonal Samling used a red–yellow cross flag. A red–yellow cross flag is also used by Swedish-speaking Finns.

The previous though unofficial flag of Orkney was that created in the mid-1990s and attributed to St Magnus,[4] a yellow field with a red Nordic cross. St Magnus (Magnus Erlendsson) was Earl of Orkney from 1108 to 1117. However, there is nothing to connect him to the red cross on yellow, this being an attribution of our day. This flag has no official status, having been declined recognition by the Lord Lyon, the heraldic authority of Scotland, due to similarity with the Arms of Ulster (themselves adopted from the Arms of John de Courcy). Historically, the red cross on yellow is likely the flag of the Kalmar Union, a mediæval Scandinavian state of which Orkney was a part.