The Flag of Dorset is the flag of the county of Dorset, registered with the Flag Institute in 2008. The 'Dorset Cross' was chosen as the flag of Dorset on 16 September 2008 following a public vote, open to all Dorset residents, and organised by Dorset Council. The independent councils of Poole (Dorset) and Bournemouth (Hampshire) declined an invitation to participate. The flag has subsequently been registered at the Flag Institute and added to their UK Flags Register.[1] 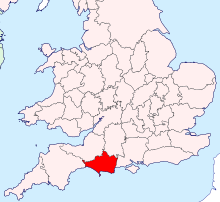 In 2007, an armorial banner of the Dorset County Council coat of arms appeared for commercial sale, and prompted calls for a Dorset flag to be officially created.[2] The council's initial response was to reject these calls saying it had no authority to create a flag as its administrative area was not the same as the county itself.[3] Following this, an independent campaign led by Dorset resident David White began to promote a flag that was conceived by Dorset expatriate Stephen Coombs and depicted by White himself. In April 2008 John Peake, the chairman of Dorset County Council, asked the Dorset public to submit other ideas for a Dorset flag through the local press.[4] Designs were submitted until the end of June 2008.

The voting took place from 12 August to 12 September and all residents of Dorset were eligible to vote. The Dorset Cross was announced as the winner on 16 September 2008 after receiving 54 per cent of the vote.[5]

The Dorset flag is made of three colours - red (pantone 186), white and gold (pantone 116). These colours are found in the arms of Dorset County Council. The gold represents several things related to Dorset: Wessex; the ancient Anglo-Saxon kingdom, Dorset's agriculture, Dorset's sandy beaches, Golden Cap, the highest point on the Jurassic Coast and Gold Hill, the nationally famous street in Shaftesbury. The Dorset militia and regiment used the colours gold, red and green. The flag also recognises St Wite, a female Dorset saint who is buried at Whitchurch Canonicorum. An Anglo-Saxon holy woman, she was thought to have been martyred by invading Danes in the 9th century. 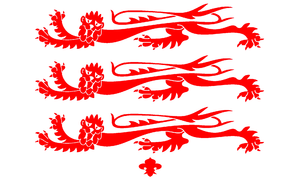 The armorial banner of the Dorset Council coat of arms includes three red lions passant guardant with a red fleur de lys on a white background. Strictly speaking, the arms only represent Dorset Council, rather than Dorset as a whole and officially, permission should be sought to use them.[7]