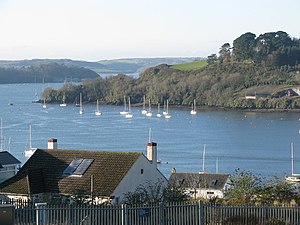 High tide at Weir Head, 26 miles from the sea 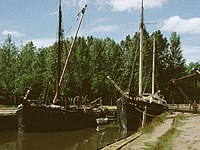 The Tamar is a river which forms most of the border between Devon to the east and Cornwall to the west. The river rises just a short distance from the north coasts of Cornwall and Devon and forms the border between them all the way to the sea with the exception of a short stretch where the county border darts west along the River Ottery, leaving Devon on both banks of the Tamar for a short reach.

The Tamar's source is some three miles from the north Devon coast, but it flows southward. At its mouth, the Tamar flows into the Hamoaze before entering Plymouth Sound, and here the apparently quiet, rural nature of the river is transformed as it broadens massively into the water which serves the Royal Naval dockyard at Devonport and the wharves and industry of Plymouth. In days gone by, the Tamar was an industrial river far further upstream, bearing the output from the mines of the Tamar Valley.

Tributaries of the river include the rivers:

The Tamar is one of several British rivers whose ancient name is assumed to be derived from a prehistoric river word apparently meaning "dark flowing".

The name is one which scholars reckon in origin is shared with, amongst others, the River Thames, the Thame, the Tame, the Tees and perhaps the Tamar's own tributary, the River Tavy.

The rocks around the edge of Dartmoor are rich in minerals; in the rocks of the Tamar Valley are ores containing tin, copper, tungsten, arsenic, lead and other minerals.[1] The mines made the river abuzz with industry. The mediæval estate of Cotehele, owned by the Edgcumbe family, was a significant producer of silver for the Royal Mint.[2] During the industrial revolution, there was significant mining activity near the river, between Gunnislake and Weir Quay.

Later, the Dukes of Bedford developed copper mines by the river and Morwellham Quay to ship the material. During this period, the Tamar was an important river for shipping copper from ports such as Morwellham, Calstock and New Quay, much of it finding its way to the smelters in Glamorgan.

The river has long been famous for the quality of its salmon[3] whilst the valley was known nationally for the high quality, and early, soft fruit and market gardens sheltered by its steeply winding slopes.

The Tamar is navigable by sea-going ships of up to 400 register tons as far inland as Weir Quay, near Bere Alston. It is here that the River Tavy joins the Tamar; below this point the two rivers form a broad, tidal estuary all the way to the sea. Above Bere Alston the Tamar is a tidal but clearly a river and not an estuary.

Vessels of 300 tons sailed as far inland as Morwellham,[4] 24 miles from the sea. A further 2-mile stretch to Weir Head, near Gunnislake, The tidal limit, was accessible to smaller passenger ships.

In 1794 the Tamar Manure Navigation Company was formed to extend navigation inland for a further 30 miles, to North Tamerton in the river headwaters, but the project advanced no further than Gunnislake. Barges of up to 30 tons could then proceed as far as Gunnislake New Bridge, bypassing the weir through the new canal. The import of fertiliser and coal and the export of bricks along this short section proved profitable for many years.[5] The section from Launceston to Tamerton was completed in 1826 as part of a separate project, the Bude Canal.[6]

A typical Tamar vessel was a sailing barge, built on the open river bank, of up to 60 tons, with a peaked, gaff-rigged mainsail and a fore staysail.[7]

The initial importance of navigation on the river was to cross this natural obstacle between the counties of Devon and Cornwall, and the old ferry crossings were later to develop into the busy river quays of the eighteenth and nineteenth centuries. In mediæval times the transport of goods to supply the Benedictine abbey at Tavistock, four miles by track from the river port of Morwellham, was significant.[8] Sea sand from the coast was imported to spread on farmland, until in the eighteenth century a dressing of lime was found to be more beneficial. Large quantities of limestone were then imported to burn in the numerous limekilns on the river quays; the lime had to be made locally as it was not slaked before application and was too reactive for transport by water after burning. Later, street sweepings and other refuse from Plymouth and Devonport, together with bones for the newly discovered bone fertiliser, were carried inland to manure the fields.

Tavistock was one of the three stannary towns of Devon and large quantities of refined tin were exported through Morwellham from twelfth century until 1838, when the requirement to pay duty on the metal at one of the specified towns was relaxed.[8] The opening of the Tavistock Canal, between Tavistock and Morwellham, in 1817 facilitated traffic. Later, the East Cornwall Mineral Railway provided an outlet through the quays of Calstock from the Cornish side of the valley.[9] Other significant cargoes exported were quarried granite and, later, copper, lead, manganese and tin ores, with their important additional mineral; arsenic. Arsenic was extracted from mispickel, once regarded as a waste material but later offering an important source of revenue as copper and tin extraction declined in profitability.[10][11] The refined arsenic was exported worldwide, in particular to the southern United States, where it was used as an insecticide in the cotton fields.

In the thirteenth century lead and silver output from the royal mines on the Bere peninsula (between the Tamar and the Tavy) was significant, and work continued intermittently until the nineteenth century. The Johnson Matthey smelting works at Weir Quay extracted silver and lead not only from local ore, but from ore imported by sea from Europe and as far away as Newfoundland.[12]

The development of the "Three Towns" (Plymouth, Devonport and Stonehouse) at the mouth of the river offered an important market for the valley's agricultural produce, needed in particular to serve the victualling requirements of the royal dockyard at Devonport, and this was always carried by boat. In 1820 or 1821 the first paddle steamer on the Tamar inaugurated a service between Calstock and Devonport to deliver foodstuffs.[13] In 1859 a rail connection from Plymouth to London was opened, and fresh produce could be landed at the Devonport steamer quays in the evening and be on sale in London by the next morning.[14] The growing city population created a large demand for sightseeing cruises on the river and this was a significant source of traffic from 1823, with the launch of the Cornish steam packet Sir Francis Drake, until the outbreak of the Second World War.[13][15]

Tourist and market traffic on the river, using purpose-built or converted steamers, remained substantial until the Devonport piers were closed and the ships requisitioned on the outbreak of war in 1939.[15] Pleasure craft still operate on the river from Devonport, but on a much reduced scale.[17]

The Tamar Valley Area of Outstanding Natural Beauty covers around 75 square miles around the lower Tamar, below Launceston, and its tributaries the Tavy and the Lynher. It was first proposed in 1963, but was not designated until 1995.[18]

According to John of Worcester, the east bank of the Tamar was fixed as the border of Cornwall by King Athelstan in the year 936, though nothing can be certain about that date. The border deviates from the river at the River Ottery, where Devonshire makes a sudden thrust westwards north of Launceston; almost a detached part as is it barely bridged across the Tamar to join this salient to the main body of Devon.

Detached parts of Devon have appeared west of the Tamar too; parts of the Rame Peninsula are attributed to Devon though locally situate in Cornwall, including the village of Kingsland.

The river has some 20 road crossings, including some mediæval stone bridges. They include, running downriver:

A fisherwoman on a tributary of the Tamar near Botusfleming

A traditional Cornish tale claims that the devil would never dare to cross the River Tamar into Cornwall for fear of ending up as a pasty filling.[19] Though unusual landscape features are often named after the devil (for example "devil's frying pan") it used to be said that the devil never came to Cornwall: he once reached Torpoint and immediately noticed that various kinds of pie were customary; he feared that devilly pie might be the next kind so returned to Devon.[20]