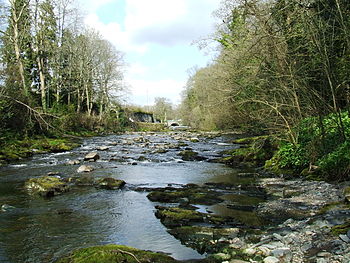 The Tavy in Tavistock 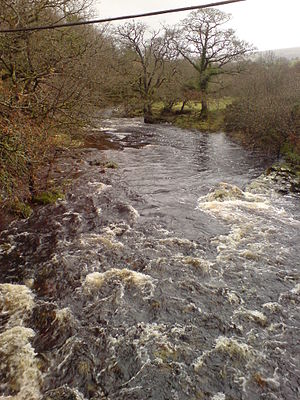 The Tavy on the moor above Tavistock 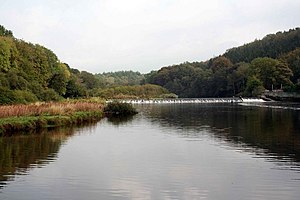 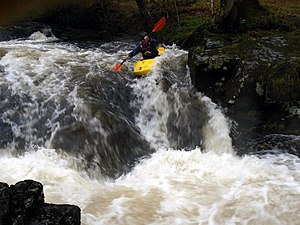 Kayaking on the Tavy

The Tavy is a river on Dartmoor in Devon. It gives its name to Tavistock, the main town on the river, and to the villages of Mary Tavy and Peter Tavy. It is ultimately a tributary of the River Tamar.

The Tavy is a Dartmoor river first and foremost. In Tavistock it is not a calm town river but a swift river which crashes over and around its granite riverbed, falling and rising dramatically with the seasons.

The name of the Tavy derives from the old British language, reconstructed as a root "Taff", the original meaning of which has now been lost.[1]

Tributaries of the Tavy include:

At Tavistock the river feeds the Tavistock Canal, which runs to Morwellham Quay and one powered the waterwheel there. The canal's modest flow now provides hydroelectric power.

The Tavy rises on the high moor, in several brooks on the hills. South Tavy Head is by an old tinner's cottage on the flat top of Cut Hill at SX595820, and other headwaters on Black Hill at SX601852; within half a mile of the sources of the River Taw, River Okemont and the East Dart. About a mile away is the source of the River Teign. Thus all of the great rivers of west, north and south Devon rise in the same hilltop marsh.

From its sources in the brooks of the high moor, the young Tavy forms a rough, steep-sided valley south-westwards, squeezing through Tavy Cleave, to emerge amongst the higher farmland near Higher Willsworthy. Its first bridge is below Creason, and then a lane follows the river down to Horndon Bridge between Horndon and Cudlippstown and down the valley past abandoned mineworkings, absorbing more brooks as it goes, on to its first eponymous villages, as it flows between Mary Tavy and Peter Tavy, each named for the river and the dedication of its church. At Mary Tavy is a hydroelectric plant, remarkably given the modest size of the river. Between the villages runs a footpath borne over the river on a wooden footbridge in the wooded valley.

Below Peter Tavy the river valley broadens and it reaches Tavistock, the "capital of Dartmoor". Until Tavistock, not a single village nor even farmstead stands on the on the Tavy's steep banks. At Tavistock the river flows through the town, bridged here by the Stannery Bridge, then the three town bridges, the ancient Vigo Bridge, the Abbey Bridge and later the bridge bearing the Plymouth Road. The Duke of Bedford who reshaped the town rebuilt the Abbey Bridge and laid a path out along the river and open spaces, and the Bedford Hotel, all in local granite, much recovered from the old Abbey ruins, and he created the canal whose waters are drawn from the Tavy by the Abbey Bridge. An almost forgotten buried brook pours out into the river at the bridge, and the whole tumbles over a weir.

The river itself however remains untamed by the town.

Below Tavistock, the Tavy passes the contiguous village of Whitchurch and then the valley becomes steep again and wooded, receiving the River Walkham in the woods at Double Waters, and writhes in wooded meanders all the way to Lopwell. In this stretch the valley is pockmarked with shafts and mineworkings; the abandoned remains of the mining industry which was once busy by the Tavy. At Lopwell the tavy passes over a weir, and thereafter is tidal.

The tidal river broadens, with Bere Ferrers on the western bank, and under the Tavy Bridge bearing carries the Tamar Valley railway line it pours into the River Tamar.

On its whole course, the only towns and villages on the riverbank are Tavistock, Whithurch and Bere Ferrers.

The river is navigable inland as far as the weir at Lopwell, about 9 miles upstream from North Corner Quay at Devonport. River transport from the Tamar was an important feature of the local farming, mining, tourism and forestry economies.[2]