Ashton Keynes is a village in the very north of Wiltshire, hard by the border with Gloucestershire. It is found about 6 miles south of Cirencester and 4 miles north of Cricklade. According to the 2001 census the parish had a population of 1,420.

The village lies within the Cotswold Water Park and stands on the River Thames about 7 miles from its source near Kemble (Thames Head). In the late 1980s a large Romano-British settlement was excavated on the edge of the village, in advance of extensive gravel extraction.

The village has many clubs and societies, many centered on the village hall. Sports clubs include the cricket, tennis, badminton and football clubs. Musical groups include two choirs, an orchestra and a jazz band. There is also a Women's Institute, a Brownie Pack, and a Golden Years Club. 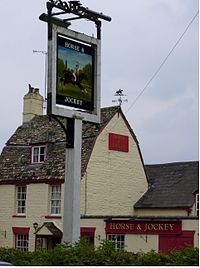 The Horse and Jockey Pub

Ashton Keynes has been a community down the ages and has seen Ancient British tribes, Roman invaders and subsequent periods of English history.

The village was known as Aesctun in 800 AD and appeared in the Domesday Book as Essitone in 1086 and 10 different spellings were recorded over the next 800 years until its present name was recorded.

From the Middle Ages when this whole area was a Royal Forest, through the Civil War when Cirencester was held by Parliamentarians, through to modern times ordinary people have lived out their lives in Gosditch.

In 1851 in the 35 homes in Gosditch were living a tailor, saddler, tallow chandler, stonemason, many glove makers and a cobbler. The School was built in this street in 1870 and a Primitive Methodist chapel was opened in 1840, but became a baker's shop later.

The Horse and Jockey was a "scrumpy house", selling cider made from the apples from the orchards in the village. The Inn was the social centre of the community where dominoes were laid and gossip exchanged, and the hard times debated.

Life By The River 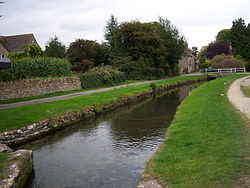 The Thames entering the village

"Sweet Thames run softly" - this has not always been the case. Ashton Keynes has always suffered from flooding, and the River Thames that flows along beside High Road and crosses under Gosditch by the little bridge was prone to washing down to the School and beyond.

Villagers expected to be flooded every winter although the water could be controlled and directed to some extent by opening and closing 'hatches' on the river. People talked of keeping their back door and front door open so the water flowed straight through, and of a foot of water standing indoors for weeks.

As late as 1924 there were 23 children absent from school in June when the houses in the Derry just south of the Horse and Jockey were marooned in their bedrooms after a night of storms.

Ditches all round the village helped to channel the water, but as these were also used as a place to tip household rubbish and the privies drained into them - there was always a serious public health problem in Gosditch.