Molesey is a town in Surrey, on the outskirts of the metropolitan conurbation. It is a typical suburban area. There are two distinct areas in the town: West and East Molesey. Molesey lies in the Elmbridge Hundred.

Molesey is separated from its near neighbours by water; the north of the town is on the south bank of the River Thames, with no bridge on this reach but the Hampton Court Bridge is situated at the eastern fringe of the town. To the west of West Molesey are several reservoirs stretching south from the Thames, while to the south lie fields, a gravel pit and yet another reservoir, the Island Barn Reservoir, around which two arms of the River Mole loop. The River Mole's two branches, known as the Mole and the Ember, mark the eastern edge of East Molesey, the two reuniting as they fall into the Thames opposite Hampton Court Palace. Molesey Lock is just above the bridge.

East Molesey retains most that is interesting in Molesey, including The "Crooked" Bell, a public house built in the mid-15th century. 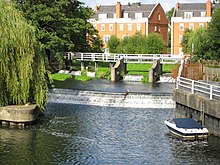 The Rivers Mole and Ember rejoined at East Molesey

Neighbouring towns are Walton-on-Thames beyond the reservoirs to the west, and Thames Ditton to the east. Across the Thames in Middlesex lies Hampton.

The earliest documentary evidence relating to a settlement in Molesey appears on a 7th-century charter; shortly after Erkenwald founded Chertsey Abbey in 666, he secured from Frithuwald King of Surrey (a Mercian underking) a charter endowing the abbey with much of the surrounding land, including Muleseg. Etymologists suggest the town's name is derived from the personal name Mul thus Muleseg is "Mul's Island". Folk etymology has it that Molesey is named after the River Mole, but more recent scholarship suggests rather that the Mole is named after Molesey.

The distinction between East Molesey and West Molesey by such names did not appear until about the year 1200, before when there was only one parish centred around what we now call East Molesey.[1]

East Molesey appears in Domesday Book of 1086 as Molesham. It was held partly by John from Richard Fitz Gilbert and partly by Roger d'Abernon. Its assets were: 2 hides and 3 virgates. It had 7 ploughs, 2 oxen, 32 acres of meadow, woodland worth 10 hogs. It rendered £6 15s 0d. West Molesey was held by Odard Balistarius. Its assets were: 1 hide; 1 church, 5 ploughs. It rendered £4.[2]

Molesey was one of the many villages and towns along the Thames valley affected by the flooding of the River Mole in 1968.

The boundary between East and West Molesey is marked by the Molesey Stone, found in the grass outside Molesey Library on Walton Road.

East Molesey Cricket Club was established in 1730 and is the second-oldest extant cricket club in the world.

Molesey Boat Club was established in 1866 and is one of Britain's leading rowing clubs. Several Olympic and World Championship medallists have been members.