Kew is a prosperous town in urban Surrey, which is best known for being the location of the Royal Botanic Gardens, known as Kew Gardens and now a World Heritage Site. Other points of interest include Kew Palace and The National Archives (previously known as the Public Record Office).

"Kew Village" refers to the parades of shops adjoining Kew Gardens station. It contains a small supermarket, a wholefood store, several independent retailers, restaurants (including the well-reviewed The Glasshouse) and cafes. There are also major high street retailers at the nearby Kew Retail Park (originally known as Richmond Retail Park).

The name Kew is a combination of two words: the Old French kai (landing place; 'quay' derives from this) and Old English hoh (spur of land). The land spur is the bend in the Thames. The name was recorded in 1327 as Cayho.[1]

The parish church is St Luke's Church in The Avenue.

In adjoining North Sheen, the parish church of St Philip and All Saints Church is the first barn church to be consecrated in England.[2] It is now in a combined parish with St Luke's.

King Henry V developed a Carthusian monastery to the south west of where Kew Observatory now stands.[3] Successive Tudor, Stuart and Georgian monarchs maintained links with Kew. One of Henry VII's closest friends, Henry Norris, lived at Kew Farm,[3] which was later owned by Elizabeth I's favourite, Robert Dudley, Earl of Leicester.[4] In Elizabeth's reign, and under the Stuarts, houses were developed along Kew Green.[5] West Hall, which survives in West Hall Road, dates from at least the 14th century and the present house was built at the end of the 17th century.[6] Queen Anne subscribed to the building of the parish church on Kew Green, which was dedicated to St Anne in 1714, three months before the queen's death.[7]

Today, Kew is a popular residential area because of its transport links and proximity to Kew Gardens. Most of Kew developed in the late 19th century, following the arrival of the District Line of the London Underground, and is characterised by large detached or semi-detached houses. Further development took place in the 1920s and 1930s when new houses were built on the market gardens of North Sheen and in the first decade of the 21st century when flats and houses were constructed at Kew Riverside on land formerly owned by Thames Water. 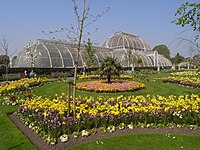 The Royal Botanic Gardens at Kew were well described by Arthur Mee as "the wonder gardens of the Empire".[8] To Kew were brought plants from across the Empire and the world for cultivation and study, work which continues today.

While the serious work of the botanist continues, Kew Gardens provide a delight to the visitor, who may wander though open gardens with plants and trees from across the world and into vast greenhouses filled with tropical plants; the Palm House in particular reaches high up to accommodate the great palm trees planted there in the nineteenth century and which are still growing, now filling its full height.

I am His Highness' dog at Kew;
Pray tell me, sir, whose dog are you?

Epigram, engraved on the Collar of a Dog which I gave to his Royal Highness (Frederick, Prince of Wales) — Alexander Pope, 1688-1744 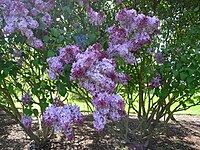 Trams and dusty trees.
Highbury bore me. Richmond and Kew
Undid me.