From Wikishire
(Redirected from Walton on Thames)
Jump to: navigation, search

Walton lies within the Elmbridge Hundred.

The name "Walton" is Old English in origin and of an uncertain meaning. The leading theory is that it is from the Old English Weala tun, which means "Welshmen's village", referring to a village inhabited by native Britons rather than Anglo-Saxon settlers.

Walton was proposed by William Camden as the place where Julius Caesar forded the River Thames on his second invasion of Britain. However, there is no evidence to support this.

Though named in the Anglo-Saxon period, there is no record of the village until the Norman Conquest.

The original village lies in the north of the current centre, while later development took place in the south, closer to the railway station. St Mary's Parish Church is of Saxon origin, with parts dating back to the 12th century. The square flint tower, supported by a 19th-century brick buttress, contains a peal of 8 bells, the oldest bearing the date 1606. The royal palace of Oatlands, built by Henry VIII in 1538, was a mile upstream to the west. 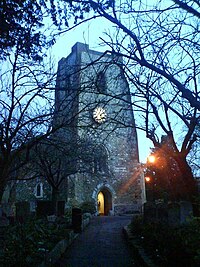 The Church of St Mary

John Bradshaw the regicide judge lived in the Tudor manor house in the 17th century. He presided at Charles I's trial and his signature was the first on the King's death warrant. He died just months before the Restoration, but his treason would not let him rest; his corpse was dug up and hung in chains at Tyburn.

During First World War, soldiers from New Zealand were hospitalised in the now-demolished Mount Felix House. They are remembered by a memorial in the cemetery, where those who died at Mount Felix are buried, and one in St Mary's Church where an annual service of remembrance is held. They are also remembered in the street-name New Zealand Avenue, the Wellington Pub (formerly The Kiwi), and a small memorial nearby.

In Second World War, owing largely to the proximity of important aircraft factories at nearby Brooklands, the town was bombed on various occasions by the Luftwaffe. On 27 September 1940, fighter pilot F/Sgt. Charles Sydney, who was based with 92 Squadron at RAF Biggin Hill, died when his Spitfire (R6767) crashed in Station Avenue. He was buried in Orpington and is commemorated today by a memorial plaque close to the crash site.

Hersham and Walton Motors (HWM) built its own racing car in the early 1950s. Stirling Moss competed in his first Formula One Grand Prix in an HWM. HWM was the world's first Aston Martin dealership that diversified into Alfa Romeo in 2009.

A town centre development was built in the 1960s and in the style of that time; cheap, lifeless and soon decaying to ugliness. By the 1990s the shops were emptying and the whole town centre had become very run down owing to poor maintenance; the shops doing well were those in older streets well away from the 1960s centre. A recent redevelopment, "Heart of Walton" includes a shopping mall and 279 one- and two-bedroom apartments with views over Ashley Park. The main part of the centre, a covered walkway, has several brand retailers. The public library was relocated and is now situated in the Heart. There are also several restaurants along New Zealand Avenue.

Walton-on-Thames is served by rail services to Walton-on-Thames railway station. A railway journey to London Waterloo takes 25 minutes. Regular bus services run to nearby towns. A pleasure boat service runs regularly on a stretch of the River Thames that includes a loop around Desborough Island. 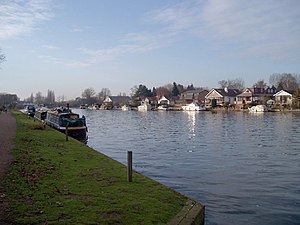 The Thames at Walton 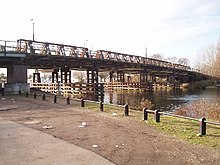 There have been five bridges at Walton crossing the River Thames so far; plans are advanced for a sixth. Before the first bridge there had been a ferry at least since the 15th century. The first bridge, built between 1748 and 1750, was a timber structure that stood until 1783. Canaletto painted a picture of this bridge in 1754. The painting, which shows the rococo-style of this bridge, may be seen in the Dulwich Picture Gallery.

The second bridge was built in 1788 and stood until 1859. Built of brick and stone, it lasted much longer than its predecessor. This bridge was painted by J M W Turner in 1805 after his sketching tour of the River Thames and River Wey.

After the second bridge collapsed a ferry-crossing resumed until 1864.

A fourth, temporary bridge was built in 1953 on the downstream side of the old bridge, which was relegated to use by cyclists and pedestrians only until finally demolished in 1985. The fourth bridge was built from prefabricated sections designed by A M Hamilton in 1930; built by Callender Cables Ltd, it was called the Callender-Hamilton Bridge.

Building a sixth bridge began in 2011 and is expected to finish by the summer of 2013. The bridge will replace the two existing bridges, which will remain in use until the new bridge is completed. The new £32.4 million bridge will have no piers in the river, thus opening up views along the river and improving navigation for boats.[2]