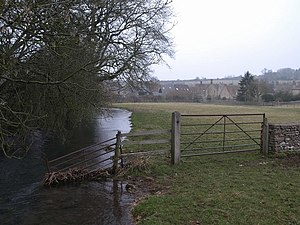 The River Churn is one of the Cotswold rivers that feed the young River Thames. The Churn rises at Seven Springs (on the A436 road) near Cheltenham, Gloucestershire and from there it flows south across the Cotswold dip slope, passing through Cirencester and joining the Thames near Cricklade in Wiltshire.

The Churn from its source to meeting with the Thames is 15 miles, which is considerably greater than the course of the Thames itself from source to the same meeting place. By some standards this would make the Churn the main river and thus make a claim to be the real Thames above that point, but historically the Churn is considered as a mere tributary river.

The name Churn is ancient, certainly pre-Roman and probably has its origins in the ancient British language, spoken by the Dobunni tribe who held the Cotswolds when the Romans came in the 1st Century. The original name may have sounded similar to Korinn. It has been suggested that the origin of the word is associated with the ancient British Cornovii tribe.[1]

Cognate names and name elements from the area are Cerney, Ciren and Corin as found in the villages of North Cerney, South Cerney, and Cerney Wick, modern Cirencester, and the Roman town name Corinium Dobunnorum (Cirencester). All these places are on or close to the River Churn.

The Coln and the Thames both feed the waters of the Western component of the Cotswold Water Park, which is made up of redundant gravel beds and is situated between Cirencester and Cricklade.

Much of the catchment basin of the River Churn is known to have been an important area of Roman settlement in the second to fourth centuries AD.

As of the year 2006 the national government is engaged in a planning study to analyse methods of mitigating future flooding associated with the River Churn.[2]