Thames Ditton is a village in Surrey, on the banks of the River Thames downstream from East Molesey and upstream from Surbiton. To the south is Esher. It is on the fringe of the lowering conurbation which may be deemed to begin at Surbiton or with Thames Ditton itself, as the townscape is unbroken between the two along the riverside and main road. Nevertheless, Thames Ditton manages to retain the character of a village, albeit a distinctly suburban one.

Long Ditton, which is more closely integrated with the suburban spread, lies to the southeast. The two together are oftentimes known as "the Dittons".

The Rythe is a small river that runs through Thames Ditton along the Portsmouth Road and down to the River Thames near Ferry Road.

The village has an active Residents' Association, which was formed in 1934 in response to recurring development threats to the character of the area.

The name "Ditton" both in relation to Thames Ditton and to Long Ditton, is from the Old English dic tun: "Ditch village". The prefix Thames serves to distinguish the two villages; Thames Ditton stands on the banks of the River Thames.

The first written record of Thames Ditton is in a charter dated 983 when King Ethelred II granted to Æthelmær, his minister, nine hides at Thames Ditton, Surrey. Furthermore, in The Cartulary of the Abbey of Eynsham Transaction, King Ethelred sent to Eynsham Abbey confirmation of the foundation (in 1005) by Æthelmær, the endowment including 20 hides at Esher (granted by Bishop Beorhthelm to Æthelweard, and bequeathed by Æthelweard to his son, Æthelmær); and land at Thames Ditton among sundry other items.

In the Domesday Book of 1086 both Ditone and Ditune appear which have been interpreted not as alternate spellings but two Dittons, of which one is now identified with Thames Ditton; it was held by Wadard from Odo Bishop of Bayeux. Its Domesday assets were: 2½ hides; part of a mill worth 1s 3d, 1½ ploughs, 4 acres of meadow, woodland worth 20 hogs. It rendered £4.[1] There were four households. Other manors that came to form part of Thames Ditton were those of Weston, Imworth (or Imber), and for a while, Claigate (Claygate). From Domesday, the combined population of Thames Ditton (4), Long Ditton (11), Immeworth (2) and Weston (9) was some 26 households of villagers and smallholders.

Isolated on marshy wetlands, the village seems to have avoided the travails of Kingston (a strategic garrison town often pillaged) and remained a relatively insignificant settlement of farming Manors, although there must have been at least one residence of note, for the Chancery Rolls of 1212 record that King John was entertained at Ditton by Geoffrey Fitz Pierre, the Chief Justice (writes Burchett). This was most likely on the site of Imber Court.

Thames Ditton became more significant when Thomas Wolsey built Hampton Court Palace across the Thames in the early 16th century. Once the palace was claimed by King Henry VIII in 1525, palace officials and other workers took up residence in Thames Ditton, which with Thames Ditton Island was a useful crossing point across the River Thames from Surrey to the palace in Middlesex, before the bridge was built in 1752-3. However, development in the village suffered greatly when Henry VIII acquired most of the lands and enclosed them within the deer Chase in the Honour of Hampton Court. After the King's death, residents of the area successfully petitioned for it to be de-Chased and normal activities resumed. From that time the convenience of Thames Ditton to London - two or three hours by horse or carriage; the cachet of nearby Hampton Court, Claremont and Esher Place, Royal Kingston with its market and coach service, and the still rural aspect of the village prompted many to make their main or second homes there and a richly diverse crop of residents both notable and less so resulted.

During the 18th century, lawlessness grew and the roads around the village were plagued with highwaymen, in particular the turnpike to Portsmouth, and influential voices within the community began to band together to deal with crime. Following a meeting at the Harrow Inn on 26 January 1792 a group of some 80 local men (a significant percentage of the sparse population) formed an association for 'the protection of persons and property' with a list of crimes, fines and rewards. 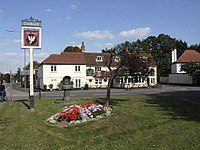 In 1801, the population of Thames Ditton parish, which at that stage included Weston Green, Hinchley Wood and Claygate, was still small: 1,288 people living in 265 houses; 167 of the workers were occupied in agriculture and 87 in trade, manufacture and handicraft. Due to the large number of mansions and estates in the area, there would have been many domestic and ancillary employees living in the village, some working at Hampton Court Palace.

During the 19th century, the village continued to grow, with the arrival of the railway in 1849 and the building of the first school. Market gardens were established in the fields around the Church to supply the metropolis. By the end of the century, the population had almost doubled but was still fairly sparse. In 1913 a booklet of 'The Suburban and Provincial Development Association' noted: "the population of the district is only about two to the acre" and "some of the trains perform the journey to Waterloo in as little as 24 minutes." And another local booklet of that period commented that "Thames Ditton.....may be said generally to abound in pretty villas whose inhabitants seem to vie with each other in friendly rivalry to beautify them." Either side of 1900 the convenience to London and boating attractions of the Thames helped to make Thames Ditton a destination of choice for weekenders including a sizeable community from the world of popular entertainment in London. Local life was utterly changed by the expansion of London's suburbs, and in the period between the World Wars most of the farming fields were sold off for housing development, and the big landowners, now richer, decamped.

There had long been a wharf near the Swan Inn on the river and this became a site for local industry. A 'Melting House' between the churchyard and the river became a skilled bronze foundry in 1874 which produced fine bronze statues exported worldwide, including the statue commonly known as Eros in Piccadilly Circus and the giant Quadriga at Hyde Park Corner. Nearby, at Ferry Works on the river bank, was the factory of Willans and Robinson who in the late 19th century made a high-speed steam engine (the Willans engine) used for early generation of electric power in places such as the Vienna Opera House. The works is preserved and still in use by a number of commercial companies. Between 1911 and 1980, the village was home to the AC Cars factory, first at Ferry Works and later located in the High Street at a site since developed into a residential and office complex.

From its creation in 1933 to its dissolution in 1994 the Milk Marketing Board had its headquarters at Giggs Hill Green in Thames Ditton where it played a significant role in providing local employment and in supporting the Cricket Club and other aspects of village life.

The village was hit by the Great Flood of 1968 when the rivers Ember and Mole burst their banks. The extent of the flooding reached from the River Thames to the Portsmouth Road and caused flood damage to many homes including some in the Embercourt area. The flood water lasted for several days.

A burst water main in December 2006 near the station caused local flooding across the village. Local shops in the high street were damaged and applied for compensation. The pipe that burst was said to be over 150 years old.

Summer Party at the Tennis Club

In 1834 Theodore Hook composed the following lines while angling in a punt at Thames Ditton:

Here, in a placid waking dream,
I'm free from worldly troubles,
Calm as the rippling silver stream
That in the sunshine baubles;
And when sweet Eden's blissful bowers
Some abler bard has writ on,
Despairing to transcend his powers,
I'll ditto say for DITTON."

I had let my flat in town, and taken inexpensive quarters at Thames Ditton, on the plea of a disinterested passion for the river. Imagine my excitement and delight! I managed to pay what I owed at Thames Ditton, to squeeze a small editor for a very small check, and my tailors for one more flannel suit. I remember that I broke my last sovereign to get a box of Sullivan's cigarettes for Raffles to smoke on the voyage.