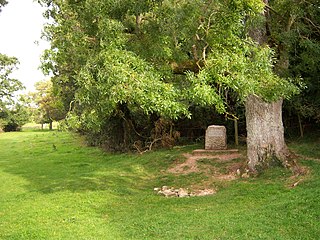 The monument at the official source of the Thames, from downstream

Thames Head is a site in Gloucestershire, very close to the border with Wiltshire, which is traditionally identified as the source of the River Thames. Thames Head lies between the villages of Coates, Gloucestershire and Kemble, Wiltshire. The town of Cirencester lies a little to the north.

From this spring, the infant Thames runs southeast and very soon passes beneath the A433 and into Wiltshire. This earliest "reach" of the river often lies dry in summer.

At Thames Head a monument beneath an ash tree bears the inscription:

A nearby basin of stones marks the spring. However, there is usually only water during a wet winter.