Pangbourne is a large village on the River Thames in Berkshire. It is known best for its fine position on perhaps the most picturesque reach of the Thames where the woods drop down to the water.

Pangbourne is some five miles upstream from Reading on the River Thames. Opposite Pangbourne across the river is the smaller Oxfordshire village of Whitchurch-on-Thames, the two villages connected by both Whitchurch Bridge and by the weir of Whitchurch Lock. The River Pang also flows through the centre of Pangbourne village before joining the River Thames between the lock and bridge. Here the county boundary runs along the southern bank of the river such that The Swan Inn sits exactly on the county boundary-line dividing Berkshire and Oxfordshire, and consequently each end of the bar is officially in a different county.

The village is the home of a well regarded independent school, Pangbourne College. 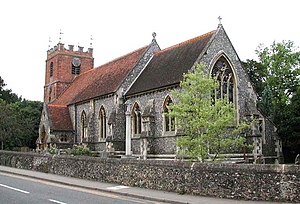 Pangbourne's name is recorded in 844 in the Old English tongue as Pegingaburnan (dative case), which means "the stream of Pæga's folk". The stream, the River Pang, takes its name as a back-formation from the name of the village once named after it.[1]

In Norman times, the manor was given to Reading Abbey and the manor house - known as Bere Court - became the Abbot's Summer residence. The last abbot, Hugh Cook Faringdon, was arrested there in 1539 and subsequently executed in Reading.

The manor was later purchased by Sir John Davis, the Elizabethan mathematician and the Earl of Essex. His monument is in the parish church which, unusually, is dedicated to Saint James the Less. Other monuments and hatchments there are mostly to the Breedon family, the first of whom bought the manor in 1671. He was High Sheriff of Berkshire and brother of the Governor of Arcadia and Nova Scotia, whose son later succeeded him. The family produced a number of sheriffs and MPs for Berkshire, as well as doctors and rectors of the parish.[1]

Kenneth Grahame, author of The Wind in the Willows, retired to Church Cottage in Pangbourne. He died there in 1932. E. H. Shepherd's famous illustrations of his book are said to have been inspired by the Thameside landscape there.[1]

At the north-west of the town is wildlife gardens Beale Park.