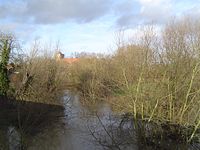 The Thame south of Dorchester, in spate

The River Thame is a river in Oxfordshire and Buckinghamshire, a tributary of the mighty River Thames.

The Thame is 40 miles long, flowing in course generally north-east to south-west. Its source is several small streams which rise in the Vale of Aylesbury on the north side of the Chiltern Hills. These streams converge northeast of Aylesbury in Buckinghamshire.

The vale streams converge very close to the new village of Watermead. After leaving Watermead, the Thame flows amongst farmland, passing the small villages of Nether Winchendon and Chearsley before entering Oxfordshire and the market town of Thame, with which it shares its name.

The town of Thame in Oxfordshire is about 15 miles east of Oxford and grew from a village beside the river, from which the village took its name.

From the town of Thame, the River Thame swings southward and after passing the villages of Great Milton and Stadhampton, its valley widens out. In this area in 1642 and 1643, the river acted as an important line of defence for Royalist Oxford. The bridges at Wheatley, Cuddesdon Mill and Chiselhampton were key crossing points, with Chiselhampton Bridge playing a critical part in Prince Rupert's movements before and after the Battle of Chalgrove Field.[1]

The River Thame then reaches the small town of Dorchester on Thames. There was a Romano-British settlement here and the town itself is was an important centre, ecclesiastical and secular, in the Anglo-Saxon period.

Just over half a mile south of Dorchester, the River Thame discharges its waters into the River Thames. The meeting of Thame and Thames is ⅔ of a mile downstream of Day's Lock.

The Thame played its part in the English Civil War for both sides. At the head of the river at Aylesbuy in 1642, John Hampden (the town's Member of Parliament) defended Aylesbury at the Battle of Holman's Bridge, a bridge which crosses the Thame to the north of the town. The lower reaches formed a defensive barrier to defend the King’s stronghold at Oxford.

The Thame has an ancient name, whose origin has not been identified for sure. It appears however to share an origin with several other rivers similarly named, in which philologists have identified amongst others the Thames, Tame, Tamar, Tavy, Taff, Tees.

According to some usage, the River Thames is named the "Isis" until its confluence with the River Thame below which it is the Thames or in Latin ther Tamesis (Ordnance Survey maps label the Thames as "River Thames or Isis" upstream of Dorchester still.) This however seems to be a student joke turned into a Victorian conceit.