Kemble is a village and parish in the Malmesbury Hundred of Wiltshire. It lies four miles from Cirencester in Gloucestershire and is the settlement closest to Thames Head, the source of the River Thames.

Kemble was once an important railway junction. The Golden Valley Line from Swindon to Cheltenham passes through the village, and branch lines from Cirencester and Tetbury met here. Today, although the branch lines were dismantled in the 1960s, Kemble railway station is still important for passengers travelling from Cirencester. The station has a direct link to Swindon and London Paddington in one direction, and to Gloucester and Cheltenham in the other.

There is but one pub, "The Tavern", is ext to the station. A combined Post Office and local store provides most essentials. 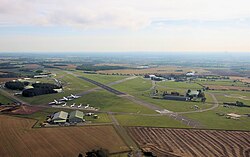 Cotswold Airport (previously known as Kemble Airport) is on the edge of the village (and directly on the county border). The airfield is used by light industry, by flying clubs and by private aircraft owners, for events including two annual air displays, and for scrapping and storage of airliners. Delta Jets rebuild, maintain and fly historic jet aircraft, particularly Hawker Hunters. The Bristol Aero collection has a museum at the airfield.

Aston Down airfield, three miles to the northwest, formerly belonged to the RAF but is now used for gliding by the Cotswold Gliding Club.