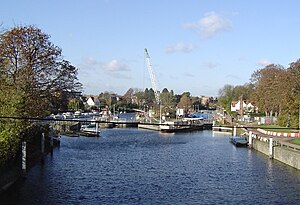 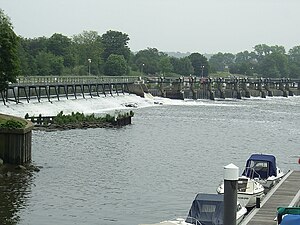 Teddington Lock is a complex of three locks and a weir on the River Thames between Teddington in Middlesex and Ham in Surrey. Despite its name, the lock is on the Surrey bank of the river, not the Middlesex bank as would be expected.

The river downstream of the lock, known as the Tideway, is tidal, though the Richmond Lock barrage downstream limits the fall of water to maintain navigability at low tide. The boundary point between the Port of London Authority, which is the navigation authority downstream, and the Environment Agency, which is the navigation authority upstream is marked by an obelisk on the Surrey bank a few hundred yards below the lock. Though Teddington marks the tidal limit, in periods of very high fluvial flow the tidal influence can be seen as far upstream as East Molesey, location of the second lock on the Thames.[1][2]

The Teddington lock complex consists of three locks, a conventional launch lock, a very large barge lock and a small skiff lock. The barge lock has an additional set of gates in the middle so it can operate in two sizes.

The large bow shaped weir stretches across to Teddington from an island upstream of the lock which also acts as the centre point for the two bridges making up Teddington Lock Footbridge.

The Navigation Act obtained in April 1771 by the Thames Navigation Commission did not allow them to build locks below Maidenhead Bridge,[3] but from 1802, several plans for locks in the First District of the Thames, stretching from Staines to Teddington, were drawn up. Stephen Leach took over the post of Clerk of Works for the First District in 1802, following the retirement of Charles Truss at the age of 82. Just before his retirement, Truss has proposed locks at Molesey and Teddington, each having a weir with long tumbling bays, similar to modern practice. John Rennie had suggested a series of long cuts in 1794, and Truss adopted the same idea. Rennie and William Jessop again proposed four long cuts in 1805, each about a mile and a half long, but the Navigation Committee were thwarted by strong opposition from landowners.[4]

Zacchary Allnutt, by then Surveyor for the Second and Third Districts, stretching from Staines to Mapledurham, suggested locks at Chertsey, Sunbury and Teddington in 1805. Rennie submitted new proposals in 1809, with nine locks between Staines and Twickenham. Two would be without weirs, while the other seven would require large weirs to be built in the river. Finally Leach drafted plans in 1810, which he suggested were "at once practicable and expedient, the least expensive, and the most likely to pass through Parliament without opposition and yet calculated to remedy the most prominent evils complained of." An Act of Parliament was obtained by the City of London Corporation in June 1810, which authorised construction of locks and weirs at Chertsey, Shepperton, Sunbury and Teddington. Each would be 150 by 20 ft with the associated weir having ample capacity for flood conditions. Rennie, Leach and the Navigation Committee visited the sites in July, to finalise the positioning of the lock.[4] Leach then took charge of the work, which was undertaken by contractors Joseph Kimber and John Dows who also built Sunbury Lock.[5][6]

Work at Teddington started in September 1810, but there were delays caused by flooding in November and December, and Leach awarded the contractors an extra £500. The lock was finished and opened in June 1811, but the weir was incomplete. The cofferdam protecting the works would need to be removed as river levels rose in the winter, which would have delayed completion until the following July, and so again Leach stepped in, awarding advance payments to the contractors, which enabled them to finish on time.[7] The lock was further upstream than the present lock complex at the point where the footbridge now crosses. It comprised three pairs of gates as stipulated in the act.[6] Total cost for lock, cut, weir, ballast and ground was £22,035 10s 7½d. of which the land from Lord Dysart's estate cost £282 10s 5d..[8] The lock was, at first, highly unpopular with the local fishermen and bargemen. After attempts to smash it, the lock keeper was granted permission to keep "a blunderbuss with bayonet attached thereto" to ward off attacks on the lock.[9]

By 1827 the timber lock needed considerable repair and in 1829 the weir was destroyed by an accumulation of ice. It is noted that in 1843 the lock-keeper prevented a steam vessel from coming through the lock. At that time steam vessels were limited to travel as far as Richmond. As originally built, the lock had timber sides up to normal head water level, and turf sides above that. The crest of the weir was 3 ft 6 in above low water level at Teddington, but following the removal of the piers of old London Bridge in 1832, the drop increased to 4 ft 6 in and increased further to 6 ft when dredging of the river was carried out.[7] The lower water levels at the bottom sill resulted in the occasional grounding of barges.

Consideration was given to removing the lock altogether in 1840.[10] However, it was decided to rebuild the lock and in June 1854 proposals included providing capacity for seagoing craft with a side lock for pleasure traffic. In June 1857 the first stone of the new lock was laid at the present position, being the central of the three locks, and it opened in 1858 together with the narrow skiff lock, (known as "the coffin"). The boat slide was added in 1869 and in the 1870s it is recorded that the weir collapsed twice causing enormous damage. After the weir had been rebuilt in 1871, the sluice bays were around 240 ft wide, similar to the total width of the tumbling bays.[7]

The footbridges were opened in 1889 and finally the barge lock, the largest lock on the river, was built in 1904–1905.[11] 7,000 cu. yds of the extracted gravel was used to raise the level of Cross Deep Ait, a former ait adjacent to Swan Island downstream, to protect it from flooding.[12]

In 1940 Teddington Lock was the assembly point for an enormous flotilla of small ships from the length of the River Thames to be used in the Evacuation of Dunkirk.

Early twenty-first century renovation and improvement work in the area around the locks was undertaken as part of the Thames Landscape Strategy Teddington Gateway project.[13][14]

In 2009 a local community group initiated a feasibility study for exploiting Teddington's weir for electricity generation, inspired by similar community-led generation schemes; Torrs Hydro and Settle Hydro. The study was encouraging and the Ham Hydro project now proposes using three reverse-Archimedean screws with a total output of 660 hp.[15] Environmental concerns, notably those raised by anglers about the potential effect on fish populations, prompted further environmental surveys during 2012. The outcome of these considerations is awaited before the Richmond upon Thames Council will determine whether planning permission is to be granted for the scheme.[16][17]

The lock is situated on the towpath on the Surrey side in Ham about a mile below Kingston upon Thames. It can normally only be reached on foot. The nearest road is Riverside Drive in Ham. Alternatively the lock can be reached from Ferry Road Teddington over the footbridges which cross the river there. 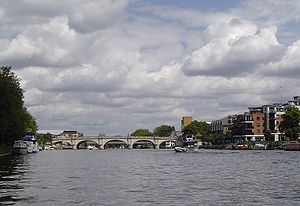 Kingston from the river

Centred ½ mile above the lock is long Trowlock Island towards the Middlesex bank, followed by small Steven's Eyot in the centre of the river. There are then Kingston Railway and Kingston Bridges. After a mile the river then curves sharply to the right with Thames Ditton Island towards the village of the same name. Finally before Molesey Lock is Hampton Court Bridge.

On the Middlesex side of the river going upstream, the bank generally consists of homes and gardens/communal grounds up to and inclusive of Hampton Wick at Kingston Bridge; Teddington Studios, Lensbury Club, watersports clubs/a football club and the nature reserve at Trowlock are on the stretch. Above Kingston Bridge is Hampton Court Park, which stretches as far as Hampton Court Bridge. Half the Longford River, which feeds the water-features of Hampton Court Palace, runs out of a grated culvert opposite Raven's Ait and below the Water Gallery. After Hampton Court Bridge (along the side of the weir stream) the bank adopts food/hotel use then residential use. 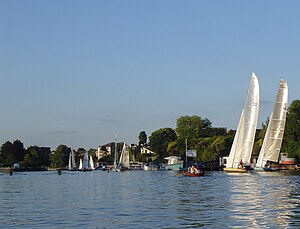 Scullers, skiffs and Thames Raters at Raven's Ait on one of the most active stretches of the river

On the Surrey side is a consistent green buffer and towpath between the river and Ham/Kingston, widening to Canbury Gardens, until the high-rise town centre is reached. The town's buildings switch to entertainment immediately south of Kingston Bridge. After the canalised mouth of the Hogsmill the riverside switches to a promenade with road by residential uses until Seething Wells reservoirs. Raven's Ait is upstream of the bridges in the centre of the river at Surbiton, followed by a marina. Long and Thames Dittons's riverside homes and pubs follow until beyond Thames Ditton Island. A riverside park and playing fields flank the mouth of the Mole until Hampton Court Bridge, near to the top of the reach, overlooking part of the Palace. Hampton Court railway station is before the bridge and just above it is Molesey Lock.

There are navigation transit markers between Kingston Bridge and Raven's Ait on the Hampton Court bank, to allow river users to check their speed. A powered boat may not pass except in emergencies between the markers in less than one minute. The reach is home to at least five sailing clubs, five rowing clubs, two skiffing and punting clubs, the Royal Canoe Club and two Sea Cadet centres. Numerous pleasure boats ply for trade, London Riverboat services and chartered trips between Kingston and Hampton Court.

The river makes an acute inside angle on this reach — the two locks are less than half the distance apart by land.

Sports clubs on the reach 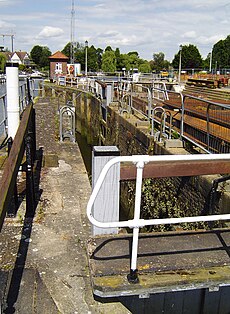 The skiff lock at Teddington

Popular culture and the media

The lock was the location of the Monty Python Fish-Slapping Dance sketch.

In episode 1 of series 5 of New Tricks (BBC TV police drama), the villain is arrested at Teddington Lock.