Long-distance footpaths in the Republic of Ireland

From Wikishire
(Redirected from Long-distance trails in the Republic of Ireland)
Jump to: navigation, search 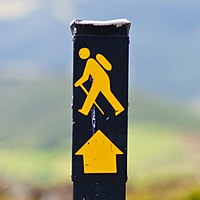 Long-distance footpaths in Ireland abound. Forty-three such walking routes are designated as 'National Waymarked Trails' by the National Trails Office of the Irish Sports Council.[1] Many are simple day-walks, while others are substantial, multi-day walks over wild terrain.

The oldest officially designated trail is the Wicklow Way, the first section of which opened in 1980. It was followed by the South Leinster and East Munster Ways in 1984; the Kerry Way and the Táin Way in 1985; and the Dingle and Slieve Bloom Ways in 1987. National Waymarked Trails continue to be developed and there are now over 2,500 miles of routes in the Republic of Ireland. The highest concentration of routes is in the Province of Munster. The most frequented trails are the Wicklow, Sheep's Head, Kerry, Dingle, Beara, Burren and Western Ways.

The 'National Waymarked Trails' trails are inspected annually by the National Trails Office and are maintained by local management committees, local authorities, local development companies and other state agencies. All routes follow woodland paths, grassy boreens, fields, riverbanks and quiet country roads in the lowlands and forestry tracks and mountain paths in the uplands. Each trail is waymarked with square black posts containing an image, in yellow, of a walking man and a directional arrow, a symbol reserved for use only by National Waymarked Trails.

In addition to the National Waymarked Trails, the Heritage Council has developed a series of walking routes based on mediæval pilgrimage paths. Two greenway rail trails have also been developed.

The impetus for the development of the National Waymarked Trails came about in response to the establishment of the Ulster Way in Northern Ireland.[2] This prompted the appointment in 1978 of the Cospóir Long Distance Walking Routes Committee (now the National Trails Advisory Committee of the Irish Sport Council) to establish a national network of long-distance paths in Ireland.[3] The committee consisted of representatives of various sectional interests, including An Taisce whose nominee was appointed Field Officer of the committee.[3] Malone had done much to popularise walking through a regular column in the Evening Herald newspaper, contributions to television programmes as well as two books on the subject.[4] The first trail to be developed – the Wicklow Way – was based on a series of articles he had written for the Evening Herald in 1966.

Each of the trails to have been developed makes use existing paths, tracks, forest roads, boreens and by-roads but, in the absence of any compulsory powers to include any of these, provision of and access to any such routes is achieved by agreement with local authorities and landowners. Agreement with private landowners has not always been forthcoming.[5] Most of the routes, therefore, are highly dependent on access provided by the state: Coillte, the state-owned forestry company, is the largest single manager of any of the trails with more than 30 National Waymarked Trails making use of its property. Coillte provides and maintains 52% of all off-road walking trails and 24% of the total amount of developed walking trails in Ireland.

Access issues mean that many trails have substantial sections on public roads.[5] Writing in The Irish Times, John G. O'Dwyer summed up the situation as follows: "Trails often tiptoed timidly through the countryside, offering extended stretches of boringly unsafe road topped with boot burning bitumen. These were frequently interspersed with gloomy trails through invading armies of monoculture, including stands of Sitka spruce that were generally as memorable as a motorway median".[5] Trail erosion has also been an issue with some of the more popular routes. 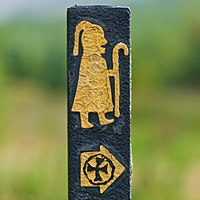 Influenced by the work done by the Council of Europe on the 'Way of St James' in the 1980s and 1990s, the Pilgrim Paths project was set up by the Heritage Council as its Millennium Project. Its purpose was to develop and support a network of walking routes along Irish mediæval pilgrimage paths to raise awareness of natural and built heritage along these routes and to contribute to tourism and community development. Seven pilgrim paths were chosen for the project and, to date, three routes have been completed and are open for walking:

These routes are waymarked with black marker posts with a yellow pilgrim symbol; an image based on a stone from a pilgrimage site in County Cork which depicts a pilgrim with a Celtic tonsure, wearing a tunic and carrying a staff. Beneath is a directional arrow inset with a cross of arcs, one of the main symbols of pilgrimage in Ireland.

A number of other routes have ben proposed at times for official recognition. The Pilgrim's Road (or Slí Mhór) between Ballycumber, County Offaly and Clonmacnoise has been developed as a cycle way since so much of the route follows roads. Work has begun on the remaining route, Saint Declan's Way between Ardmore and Lismore in County Waterford. Voluntary groups on both sides of the Knockmealdown Mountains began work on the route in 2013, waymarking is expected shortly. The first organised walk of the route takes place on 24 to 28 July 2013.[6]

There are also three 'greenway' rail trails in the Republic of Ireland:

A project has been initiated to create an 50-mile Connemara Greenway along the route of the former Galway to Clifden Midland Great Western Railway. The Dublin-Galway Greenway has also been initiated.[10] The 174-mile route is planned to be completed by 2020.[11][12] Sections of the route follow the Royal Canal from Dublin, as well as the disused Mullingar-Athlone rail line.[11][13]

There is also a campaign to create a greenway on the Claremorris, County Mayo to Collooney, County Sligo section of the Western Rail Corridor.