Claremorris is a town in County Mayo, at the junction of the N17 and the N60 national routes. The population of Claremorris in the 2011 Census was 3,979.[1]

The town sits at the bottom of a valley, all roads leading to the town follow hills, in particular the old Knock road (known as the Knock hill) and Courthouse road. Although low-lying, the town does not experience flooding. There is no major river through the town.

The town derived its name from Maurice de Prendergast, a Norman who came to Ireland in 1169.

The main landlord family in Claremorris was the Browne family, one of whom, the Hon. Denis Browne (1760-1828), was High Sheriff of Mayo during the Irish Rebellion of 1798 and acquired the nickname of "Donnchadha an Ropa" (Denis the Rope) as a result of his treatment of captured rebels, who had also burnt down his house. He was afterwards MP for Mayo in the UK Parliament. 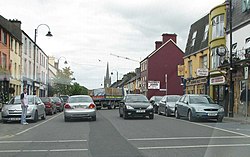 Many new shops have been added in the last few years, including The Silverbridge Shopping Centre. With the development of Chapel Lane from a derelict street to a commercial street, this part of the town has been transformed. Four supermarkets compete for customers in the town including retail giants Tesco and Aldi.

There are three hotels including the modern 4-star McWilliam Park Hotel, which opened in late 2006. It has a leisure centre, swimming pool and conference facilities. The town has several restaurants catering for Italian, Indian, Chinese and Irish cuisine.

Claremorris has many pubs, however a number have closed down in recent years. The town has two nightclubs namely Rumours and Diceys.

A swimming pool and leisure centre opened on 1 September 2009. A new Garda Station opened in 2008. A new 6-screen cinema has been planned.

There are two secondary schools - St Colman's College for boys and Mount St Michael for girls - and several primary schools.

The surrounding countryside is of rolling drumlins, eskers, woods and lakes.

There are a number of sporting clubs including: 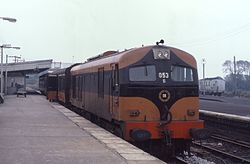 Claremorris is situated at a major road junction. The N17 (Galway-Sligo road) and the N60 (Castlebar-Roscommon road) meet in the town.

The town was once a major traffic bottleneck, until the N17 bypass opened in July 2001. Journey times at peak periods were reduced by 30 minutes on the Galway/Sligo route after the opening. The project was built as a grade-separated single carriageway. The new ten-mile road bypassed one of Irelands most treacherous national routes, the original seven-mile stretch between Claremorris and Knock had a very high accident rate due to its poor alignment. The busy N60 still passes through the town via an inner relief road. A second bypass for the town is included in the proposed new N60 road to Castlebar, in 2011 the NRA suspended this road development due to government cutbacks.

Claremorris railway station is served by the Dublin Galway/Westport line as well as the Ballina Branch Line. There is currently a campaign underway to open the Western Railway Corridor through Claremorris linking Limerick to Sligo. The Claremorris-Tuam phase was due to open in 2014 but is indefinitely postponed.

Claremorris is home to one of Ireland's eight inland weather observing stations, located a mile from the town centre. It began recording weather in November 1943 and was run and staffed by a local family. During WWII Ireland provided detailed weather reports to the Allies. Weather reports from Claremorris and Blacksod Lighthouse (located on the west coast of Mayo) played a significant factor in selecting the date of launch for the invasion of France (D Day) on 6 June 1944. In 1996 staff were relocated to Ireland West Airport Knock and it now operates automatically with data uploaded to Dublin [1].[3]

Claremorris is the birthplace of: