Blacklion s a border village in the west of County Cavan, along the N16 road just across the border from the Fermanagh village of Belcoo.

It is known in Irish as An Blaic but also An Leargaidh.[1]

The ruins of the mediæval Killesher Church stand about two and a half miles south-east of Blacklion.[2][3] The ruins stand on a hillside in the south-west of Fermanagh, between Blacklion and Cladagh Bridge, very close to the Hanging Rock and overlooking both the Gortatole Outdoor Education Centre and Lower Lough MacNean.[2] The current ruins sit on an Early Christian ecclesiastical site associated with St. Lasser or St. Lasair.[2] The modern Parish of Killesher (in both the Roman Catholic church and the Church of Ireland) is named after this ancient site.

The original name of the village was 'Largay' (also Largy, Largain, Largin and Largan, from the Gaelic Leargaidh meaning a hillside), which was a túath belonging to the Coffey McGoverns, a sub-sept of the McGovern clan, from the 8th century until the Plantation of Ulster in the 17th century. King James I then granted it to Nicholas Pynner in the following grant:

Patent 13 James I. XL-8. 14th December. Grant from the king to Nich Pynner, Gent. Cavan Co. In Largy, or Largin Ter. The Precinct of Toom, containing 4 polls, called Gortnesillagh, Mullaghgarrowe, Rossan and Ture or Toore. Total rent £1-12-0 English. To hold for ever, as of the Castle of Dublin, in common socage.

The Annals of the Four Masters under the year 1594 state:

M1594.7: O'Donnell, as we have stated, was encamped, laying siege to Enniskillen, from the middle of June to the month of August, until the warders of the castle had consumed almost all their provisions. Messengers came to O'Donnell from the Scots, whom he had before invited over, to inform him that they had arrived at Derry. And those who had come thither were Donnell Gorm Mac Donnell, and Mac Leod of Ara. O'Donnell then set out with a small number of his forces to hire them; and he left another large party of them with Maguire to assist him, and he ordered them to remain blockading the castle. When the Lord Justice, Sir William Fitzwilliam, had received intelligence that the warders of Enniskillen were in want of stores and provisions, he ordered a great number of the men of Meath, and of the gentlemen of the Reillys and the Binghams of Connaught, under the conduct of George Oge Bingham, to convey provisions to Enniskillen. These chieftains, having afterwards met together, went to Cavan, O'Reilly's town, for provisions; and they proceeded through Fermanagh, keeping Lough Erne on the right, until they arrived within about four miles of the town. When Maguire (Hugh) received intelligence that these forces were marching towards the town with the aforesaid provisions, he set out with his own forces and the forces left him by O'Donnell, together with Cormac, the son of the Baron, i.e. the brother of the Earl O'Neill; and they halted at a certain narrow pass, to which they thought they the enemy would come to them. The ambuscade was successful, for they came on, without noticing any thing, until they fell in with Maguire's people at the mouth of a certain ford. A fierce and vehement conflict, and a spirited and hard-contested battle, was fought between both parties, till at length Maguire and his forces routed the others by dint of fighting, and a strages of heads was left to him; and the rout was followed up a great way from that place. A countless number of nobles and plebeians fell in this conflict. Many steeds, weapons, and other spoils, were left behind in that place by the defeated, besides the steeds and horses that were loaded with provisions, on their way to Enniskillen. A few fugitives of Meath and of the Reillys escaped from this conflict, and never stopped until they arrived in Breifny O'Reilly. The route taken by George Oge Bingham and the few who escaped with him from the field was through the Largan, the territory of the Clann-Coffey Magauran, through Breifny O'Rourke, and from thence to Sligo. The name of the ford at which this great victory was gained was changed to Bel-atha-na-mBriosgadh ('Ford of the Biscuits'), from the number of biscuits and small cakes left there to the victors on that day. When the warders of the castle heard of the defeat of the army, they surrendered the castle to Maguire; and he gave them pardon and protection.

In 1625, the McGoverns planned an uprising against the English Crown. On 21 August 1625, the Fermanagh Assize Judges wrote from Enniskillen to The 1st Viscount Falkland, Lord Deputy of Ireland, as follows-[4]

We received news of it on arriving at Enniskillen from the Archbishop of Cashel and Sir William Cole. The Maguires of Fermanagh and Magawrans (McGoverns) of Cavan were the leaders. They proposed to raise arms in anticipation of a Spanish landing, to surprise the castles, and to take back their confiscated lands now in the hands of undertakers. We examined one Phelim bane McCabe and gained from him the names of the ringleaders, both Maguires. We drew bills of indictment against four leaders. We arraigned and tried them by a jury of good freeholders of the English who found them all guilty. We shall sentence them to death; but if your Lordship wishes to mitigate the sentence, they can be sent to Dublin; provided they have a good guard, for the natives are all embarked in the plot. We await Deputy's advice before proceeding further. We do not like to set the witnesses free lest they should receive violence from the friends of the accused. Nor can we imprison them as there is no separate room in the jail, and they would have to be with the accused. We have therefore remitted them to the sheriff's house, only to be restrained from conference with any of the Irish, for which we have undertaken to try and get the sheriff some payment.

that he found Bryan McTerlagh McCoigh McGawran and Cahell McGawran of the Largan, amongst others, in a wood, where they were taking some snuffing tobacco. Afterwards Terlagh Wolly Maguire came and asked him to join a rebellion, saying that the Spaniard was coming and on the sea, and that the King was dead. He met the conspirators again subsequently and they urged him to join them and rob the country. If the Spaniards came the natives would rise and take Portora, Castleton, the Castle of Tully, and Sir John Dunbar's house. The leader was to be Shane a' Warra Maguire, and others of the Largan and Clanawly. And that the names of the conspirators in the land of Cavan were Terlagh Oge Magawran and Gerrod Magawran (alias Ferdinando). 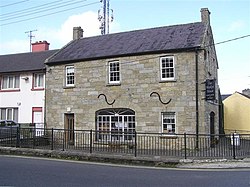 The name of the village was changed to Blacklion in honour of a famous coaching inn in the village, the Black Lion.[5] Wilson's Post-Chaise Companion of 1786 states:

The aforementioned inn may have been the establishment which gave shelter and hospitality to the founder of Methodism, John Wesley. In the 1770s, during one of his many tours through Ireland, he recorded how bad weather forced him to stay the night at a local inn, Carrick a Beg, whose proprietor was sympathetic to his message- After riding round, and round, we came in the evening to a lone house called Carrick-a-Beg. It lay in the midst of horrid mountains; and had no very promising appearance. However, it afforded corn for our horses, and potatoes for ourselves. So we made a hearty supper, called in as many as pleased of the family to prayers, and, though we had no fastening either for our door or our windows, slept in peace. The site of The Black Lion Inn was occupied by Dolan's Hotel in the 1920s. Ambrose Leet's 1814 Directory spells the name as Black-lion.[7]

The Night of the Big Wind in January 1839, a massive storm which broke across much of Ireland, caused structural damage to the Protestant church at Thornhill, to the west of Blacklion. This was never fully repaired. According to local tradition Blacklion was the first place in County Cavan to be affected by the potato blight in the autumn of 1845. Deaths as a result of malnutrition and disease in the subsequent Great Famine were high.

In 1879 the Sligo, Leitrim and Northern Counties Railway line opened with Belcoo station serving both Belcoo and Blacklion. The last trains ran through the station on 20 September 1957. The railway bridge crossing the river between Blacklion and Belcoo was blown up by the British Army in the late 1970s, ostensibly to prevent its potential use by the Irish Republican Army for moving arms across the Irish border.

Today the nearest railway station is in Sligo with trains to Dublin Connolly.

In the 1950s the village name plate read 'Learga' and this was the name by which local older generation people would have called the place – colloquially called 'Leargy'. Learga is the plural of an Irish word Learg meaning rising ground, slopes, or mountain side, and this description would connect with the topographical location of the village, which sits below steeply rising ground and hills. Today, 'Learga' no longer appears on the village signs, which now show An Blaic. The village is generally referred to by local residents as 'The Black'.

During The Troubles, Blacklion, as a main border crossing, was home to a joint Irish Army/Garda Síochána checkpoint. It was the scene of a bomb attack in 1974 by the Ulster Volunteer Force.[8][9]

Blacklion stands between the lakes of Upper and Lower Lough MacNean. The river which connects the two lakes forms the border between County Cavan in the Republic of Ireland and Fermanagh in the United Kingdom. A bridge over this river connects Blacklion to the village of Belcoo in Fermanagh. Blacklion sits at the foot of the hills below Cuilcagh Mountain, the summit of which is the county top of both counties, the border running over it.

Blacklion is on the N16 road that goes from Sligo to Enniskillen and on to Belfast (becoming the A4 when it enter the United Kingdom). In addition to being on the border of County Fermanangh, Blacklion is also just three miles from the border of County Leitrim. The point where the three counties of Cavan, Leitrim and Fermanagh join is in the centre of Upper Lough McNean.

Attractions near Blacklion include:

In Leitrim, Glenfarne Forest with its lakeside walks;

Two miles south of Blacklion lies the Cavan Burren, a limestone landscape containing a number of Neolithic remains, which was planted with forestry in the 1950s and has since been partially reclaimed and signposted to provide access to its structures and geological features.

The Cavan Way, a fifteen-mile waymarked walking trail runs from the village of Dowra, County Cavan to Blacklion. It links up with the Ulster Way at Blacklion and the Leitrim Way and Beara-Breifne Way in Dowra.

Blacklion also has a nine-hole golf course and an award-winning restaurant, the MacNean Bistro, run by chef Neven Maguire.