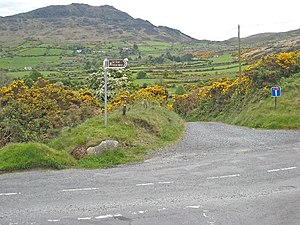 On the Táin Way below Carlingford Mountain

The Táin Way is a walking trail around the Cooley Peninsula in County Louth. It is a circular Route 25 miles long which begins and ends in Carlingford. The walk is typically completed in two days.[1]

The route is designated as a 'National Waymarked Trail' by the National Trails Office and is managed by the local council, Coillte and the Walks Partnership Group.[2]

The walk takes its name from an ancient tale the Táin Bó Cúailnge ('The Cattle Raid of Cooley'), a legend of early Irish literature, many of whose events take place on the Cooley peninsula.[3] The trail was devised by J. B. Malone and opened in 1986.[4]

The trail starts in Carlingford, climbing along the northern slopes of Slieve Foy, the county's highest mountain before crossing Clermont Pass, below Clermont Carn, to reach the village of Ravensdale.[5]

From Ravensdale, the route follows a ridge between Carnawaddy and Castle Mountain in the Cooley Mountains before crossing the southern flanks of Slieve Foy to return to Carlingford.[6]